In Memory of Parker 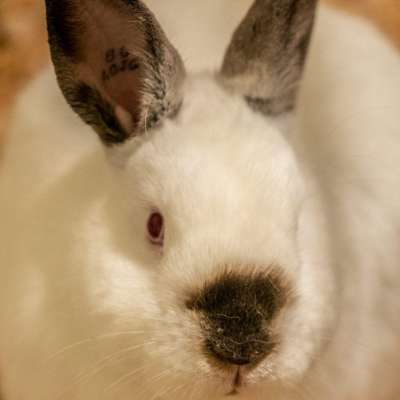 He looks to be either a young Californian or maybe a Himalayan, but he was most definitely bred to be a pet rabbit and would not have survived the wiled.

But that is where he ended up one day. After being abandoned he spent a weekend (at least) lost and alone, terrified to come out from under a fallen branch in a pullout near Hayward Lake.

He was cold, wet, hungry and utterly defenseless. Two animal-loving folks lured him into a carrier with a carrot and called SAINTS. No
shelter was taking in rabbits at the time (2018), not with everyone under quarantine due to the RHVD-2 outbreak.

Parker's options were very, very limited. SAINTS' buns were also in quarantine and as we only got half our vaccines that year, we absolutely could not allow a new bun into our existing rabbit area.

But at SAINTS, where there's a will - and we have that in spades - there is often a way.

Instead, we did what we have always done...we stretched, we squeezed, we improvised and Parker's life was saved. In isolation for
the next two weeks, we waited to see if Parker had been infected by the virus.

So very luckily, given how aggressive the virus was in 2018, he did not have RHVD-2! He was released in to our general rabbit population where he fits in wonderfully. Even further luck reached Parker when we realized that Carol had ordered 20 vaccines even though we had only needed 19. She knew there would be someone who would need one.

You can see Parker enjoying some tasty crackers, shared with his buddies, in the video below. So cute! 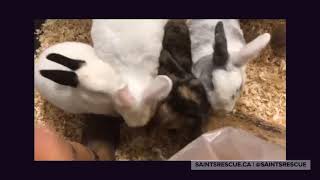