We're raising money for the animals! check out our annual charity lottery to see how you can win big and help the Saintly Crew at the same time.

Luna is fostered by SAINTS' Director, Carol Hine, and lives at SAINTS.

Nobody knows Luna like Carol does, and so nobody can better describe what a wonderful dog she is. Here is some of what Carol wrote about Luna in a February 2020 blog post, about Luna's arrival in 2014 and her progress in the years since:

... She was barely a year old with a history of poor socialization, biting, destructiveness, fearfulness and an inability to be housetrained.

And so Luna came bringing chaos, frustration and regret in her wake. For the first few weeks to months I alternated between hope and despair. Everything about her was so very disruptive here. She snuck up on people and bit them in the ass. She grabbed the dogs’ tails with her very sharp teeth and pissed them off. She tore the trim off of windows and doors. She threw herself at me until my arms and hands were a mass of deep bleeding scratches and she wouldn’t stop. Everything she did she did big and she did wrong.

So here we are 6 years later and Luna is still a bit of an odd duck dog. She won’t let strangers anywhere near her, barking as she runs off. The staff still won’t do some necessary things for her like apply monthly flea control because she gets that not to be trusted look in her eye that they may regret doing what they just did. Having said that, I can do anything to her for one simple reason, Luna loves me and trusts me with her entire body and soul. She and I have a one in a million kind of relationship. We melt into puddles of emotional goo just looking at each other. It is true and endless love.

Luna is without a doubt the most loving and loyal dog I have ever been blessed to know. She was never an easy dog but she was so very much more. And here she is 6 years later, happy, loved, safe and secure while shining her blinding light into the darkest recesses of my sometimes cynical soul. 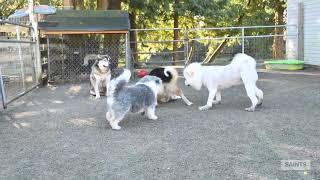 For Chad and Kirsten from Richard Wilson

For Chad and Kirsten
from Richard Wilson