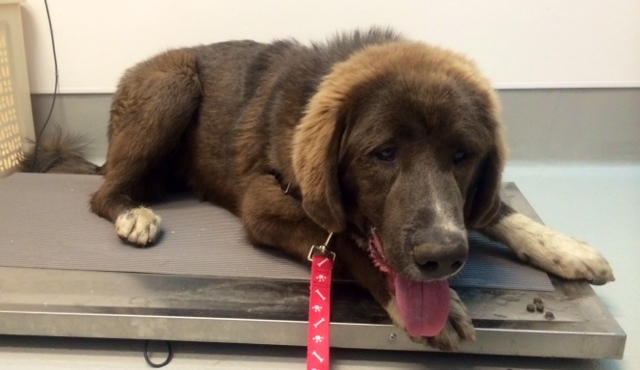 rio is arriving tonight...i will let you know how it goes.

geezer was rushed into the vets with a suddenly swollen face. it is an abcessed tooth that they drained today but he needs a week of antibiotics before they will do the surgery to pull the tooth. poor guy..that looks like it really hurts!

pooch is starting to have the cage door open for brief periods in anticipation of expanding into the full saints world.
claire is still in hiding...this makes me sad.

lily has decided to join the computer room cats and dogs. she has been snooping around getting to know everything.

new dog coming in soon. gilligan is a young tibetan mastiff cross with extreme fear issues. he was abandoned on a blueberry farm when the tenants moved away and it took AC staff several days to catch him. he is described as a 90 pound marin and is terrified of pretty much everything...poor boy. he looks pretty sad in his photo, i hope he settles and can be happy here.

gilligan will also need a sponsor for the gala if anyone wants to be his special friend! he will most likely arrive in about a week after his neuter.

Another very sad story about leaving an animal behind when the tenants/owners move away - so very heartless! So glad he will be coming to Saints where he will never be abandoned again.....

Gilligan looks gorgeous. All the happy animals at saints will make him feel better about life.

lol...i grew up watching gilligan's island every day after school erin...gilligan is a perfect name for a lost, inept, but good hearted little soul!

gilligan is an AWFUL name! i dont know about wilson (sorry mo:)) but he sure needs something better than that.

Hopefully all went well with Rio...Gilligan is beautiful..but he doesnt look like a Gilligan...he looks like a Wilson..:-)

Gilligan is a gorgeous dog..... i'm sure he'll find his place at SAINTs. he'll have plenty of other dogs to help him feel more comfortable.
(and i'm sure little hussy Miss Mystic will get a good, proper crush on him!)

Gilligan's story breaks my heart - if he's so afraid of everything, who knows what his past life has been like. Hopefully he settles at Saints and learns to trust again..

i've had abscessed teeth. they hurt like a sonofabitch! it should feel better pretty quickly.