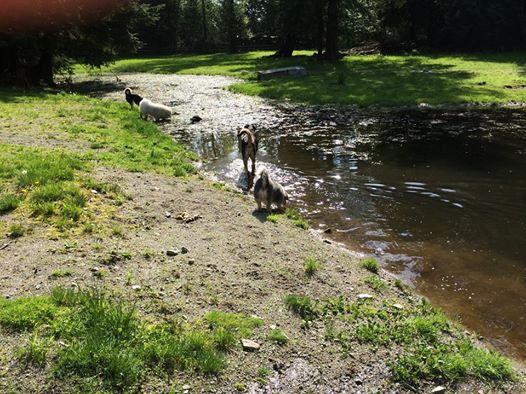 kevin said yesterday that ginger did better with ellie. while ellie slept in the shavings pile, ginger just bounced around all over the place and then popped up to sniff ellie occasionally before continuing on her curious way.

zander is 100% settled in..he is a good fit with the june and mystic gang. the posse gets bigger.

i gave rudi a soft sided large crate that we had hanging around here but never had used. i thought he would like it because he was used to sleeping inside a dog house and it would feel familiar (but a little more comfortable) for him. i was right..he likes it. he also really likes all of the spoiling and attention he is getting. it looks like that sore on his testicle is actually healing so i am now thinking it is not a fungating tumor but a pressure/bed sore instead. this would be good news. i also picked up a large and thin anti-fatigue mat and some washable carpet runners for his room so pressure sores should never be a future concern for him and it will help with his arthritis and mobility issues to have secure, non slip footing under him too.

oliver three is a total dick. he is used to dionne and me so we have no problem with him but he was not happy when erin and renee got busy with moving him to the house. erin said he tried to eat them both. anyway..no way was he going to be successful with the computer guys..robbie and roxy were like the worlds worst match for him. so he is back in his mp room pen and we may not be able to ever get him moved out of there. just in case that becomes his permanent home, i asked the staff to give him a chair. last night he was sitting in the chair looking out the window which made me nervous because i am not sure how secure the locks are on that window..i might want to further investigate that!

jazzy and darby have a matching pen now across from oliver three's except they have a loveseat in their new pen because there are two of them. jazzy and darby are allowed out of their pen when supervised to ensure they leave pepper alone. so being confined in a pen on a love seat is not a big deal when no one is around.

tammy will be happy...the mp building was settled to bed with the sound of music playing on the DVD for them all...bet rudi thought..what the heck is that sappy crap?!

tinsel the diabetic cat is doing ok...not ready to stay out of her cage yet but trying short foray's out.

i called and checked on bobbi and rosie..they are both doing well in their new home.

i think that is all of the updates for now.

They love the movie. Tess really enjoyed it when she was in the MP room, I bet she is missing it.

Tammy - are you sure they love the Sound of Music? Not like they can say "turn it off, we don't want to watch this AGAIN". LOL!!!!!

Glad to hear Bobbi and Rosie are settling in.
Also I'm over joyed to hear the gang got to watch The Sound of Music when I'm not there. They really do love it (also happens to be one of my favorite movies).

I love reading about how Rudy's world is getting so much better for him...to watch him try to walk with you to the memorial Garden on the week-end broke my heart,,,I simply can't understand how anyone can see a animal right in front of them in obvious pain & discomfort & not do a thing about it . I can't wait to see him start to feel better & move easier..it is one of my most favorite things about volunteering at SAINTs.. like Capone...I remember when he 1st came & i was walking him early before everyone showed up..it was an effort for him to make it once around the lower field & back...now he spends all day hangin with us at the barn..granted a lot of the time he is just lazing around getting in the way of wheelbarrows...but he is so much happier & mobile.