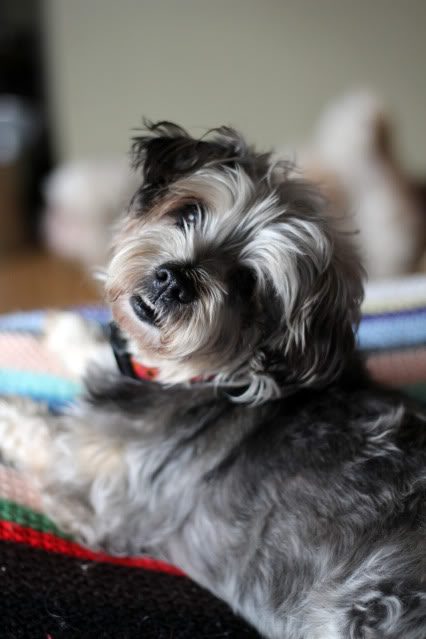 i don't like that this new blog format no longer has the ability to type in a name search for one of guys. i used to be able to type in say...hilda...and i would get every post ever written that carried her name. i could read her whole history in little details over the years of her life here at saints. and i used to be able to know when they got here and what being here meant to them.

but i now can't do that..i have to try to remember it all in my head.

anyway...due to my faulty memory, i can't really say how long hilda was here...seems like forever but i will hazard a guess that it was about 6 or 7 years. i guess this because if i try to break down her history with us, it was in chunks of particular events. she arrived from LA, an unclaimed stray with a bad eye and that hernia. we did the surgery to close it but it opened back up right away. hilda mostly ignored me for the first year or so...i was the one who sought her out for cuddles and affection. she accepted it with good grace but i wasn't anyone special to her. it was in the second year that she bonded with me and then she was the seeker of the warm and fuzzy, lovey/dovey stuff. and hilda was like a tank on a mission..she would literally forcefully bowl me over to get what she wanted. i can still remember her strength as i tried to hold her back from licking my face off and shoving her entire body right into my face til i could no longer even breathe. hilda loved like a rhinosaurous..there was nothing gentle about it, she was absolutely completely determined at fulfill her current affection needs.
but...no one was interested in adopting her for the first few years, she didn't show very well..hilda pretty much ignored other people and if they really tried to make friends... she would bite them to make them go away! eventually she stopped being so picky and started liking everybody.

one day (after hilda developed some more extensive social manners), reggie's mom came looking for a friend for reggie..i thought hilda would be a good match. it was a great home and hilda would have had anything and everything her heart ever desired..so off she went. it was a good plan as far as i was concerned..hilda thought the plan sucked. she spent the next 2 weeks continuously screaming until her new mom finally gave up and brought her home. hilda stopped screaming the minute she walked back into what she had already decided was her permanent home.

whatever...where she ultimately lived forever was entirely her choice.

so hilda came off the adoption list and became a permanent sanctuary babe and to a certain extent that was the point for me at least where our relationship changed. there was not going to be an happily ever after fairy tale home for hilda...apparently, i was it. and that meant that i had to step it up a notch in my life long committment to her. since hilda was no longer in search of a home and i had to make sure she never regretted choosing this as her home....i don't think she ever did.

hilda's happily ever after life involved me and my bed.

i don't know what i was thinking, even considering that surgery for her. she was somewhere around 16 yrs old...her heart was toast, her teeth were horrible, she had already failed once with the surgical hernia repair years ago and hilda totally freaked out emotionally if she was not at home.

anyway...it wasn't until the very moment of her death that i knew i made the right decision for her, there was no way she was going to be able to handle that stuff coming up next.
so i am ok with her passing. it was right for her.

except....last night, i really missed her.

**edited by Jenn - Photo and link to video added**

Sweet dreams Hilda you were a cutie...hugs to you Carol it's been a really rough week or two!

I just read about Hilda, that's so very sad. I remember first reading the Saints blog and how Hilda and I think it was Larry came from LA. They both had the cutest determined faces and if I remember from the blog, they both decided Saints was their home after unsuccessful adoption attempts. Hilda was really happy at Saints, you could tell from her photos and reading about her. I'm so sorry, such a tough week for everyone there.

Thanks for sharing Hilda's story. It has been a sad week Carol for all of you at Saints - my sincere sympathy to everyone.

Too many are leaving us..the door needs to close & stay that way for a bit. RIP dear Hilda, I will always remember her & how quick she could be when I was giving treats to the bed buddies. You will be missed.

yes she always made sure she was noticed and received her fair share of food or pets…..great gal with spunk…..RIP dear Hilda

ahhh..thx ali, you are right and it worked!

i was wrong..hilda didn't arrive here until mid 2010! why does it seem so much longer than that??? my poor old brain just doesn't work like it used to i guess.


and i found that hilda adopt me video jenn made..that was an unexpected treat, i forgot she was one of the adoption video guys.

Thank you for her story...I am so sorry for your loss Carol.

On the side bar of the blog there is a box that says search saints. If you type Hilda into that everything written about her will come up.