Where are they now? The Story of Floyd - CETFA 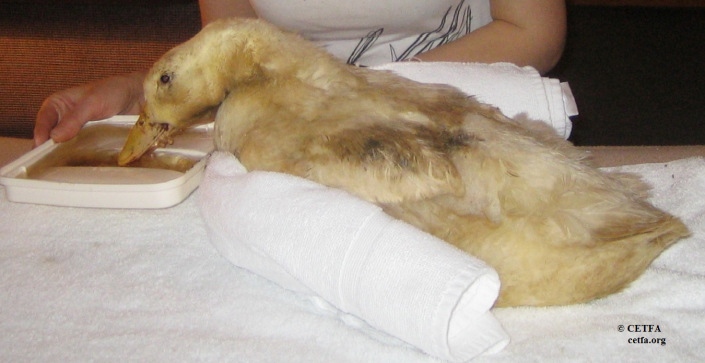 saint Floyd's original rescuers at Canadians for the Ethical Treatment of Food Animals (CETFA) have done a great follow-up story on him, check it out: http://cetfa.org/2014/07/11/the-story-of-floyd/

Where Are They Now? The Story of Floyd

Five years ago this month, CETFA inspectors found and rescued a sweet duck they named Floyd. Floyd was living with thousands of other birds on a duck factory farm. The shed he was in was filthy; dying and dead birds in varying stages of decomposition scattered the ground around him. Things weren’t looking good for Floyd – he was on his back, unable to right himself to reach food or water, and covered in parasites.

Floyd just after his rescue by CETFA investigators from a duck factory farm.

Once back in their hotel room, the investigators applied cool cloths to Floyd’s feet and placed a rolled up towel under his emaciated chest and keel bone. Floyd was too weak to stand but drank profusely. Little by little, Floyd regained strength, and within a few hours, took his first wobbly steps toward one of his rescuers, flopping down into her lap to sleep. Floyd had very likely never known kindness from a human, yet clearly understood that he was in caring hands.

The next day, the investigators brought Floyd to SAINTS Rescue (Senior Animals In Need Today Society) – a beautiful animal sanctuary in Mission, BC., where Floyd continues to live, never again having to fear for his safety.

The contrast between where Floyd started his life and where he’ll live out the rest of it couldn’t be more profound. Floyd is now a radiant, handsome drake, happily swimming and enjoying time with fellow ducks, Edwina and Tiny Tim. We are so thankful to SAINTS for all they’ve done for Floyd and the many other rescued farmed animals in their care.

Floyd at SAINTS sanctuary, five years after his rescue from a duck factory farm by CETFA investigators.

Floyd is one lucky duck! And I mean that sincerely :)

I didn't realize how much that duck had been through. He is a fighter like the rest of the Saints residents

it was from your photos, Jenn, that made me really see birds and how beautiful they truly are. Floyd, of course, was one of the examples of this.

i will never look at birds the same way again.