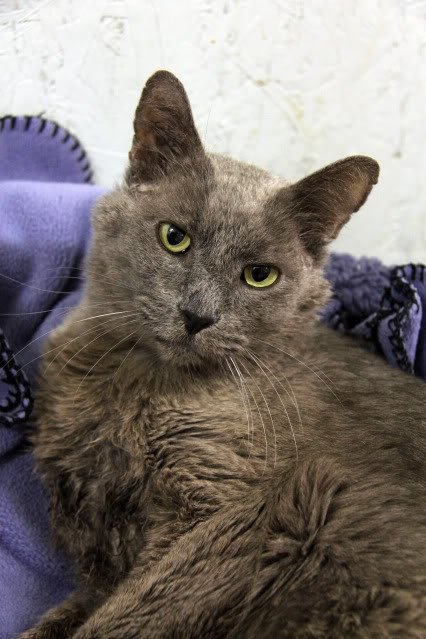 he came in back in march of 2011 with one of the worst mouths we have ever seen. his previous owner had been treating him homeopathically and refusing to remove all of his teeth because she thought it was mean. by the time he came to us, he was so emotionally damaged from long term unbearable pain, that he would not leave his bed, not even to pee, he would not walk at all unless we made him and he could not eat without screaming. we spent the next 2 years healing him. he had a full mouth extraction of all of his teeth..he had months and months of pain meds, antibiotics, steroids, anti-inflammatories, cartrophen injections, and hand feeding. his last painful mouth flare up was in march of 2013, and until last week he was almost 18 months fully pain free and our healed marvin was able to walk up to a food bowl when ever he wanted and painlessly eat.

last week marvin hit his bed again, we took him to the vet thinking his mouth had flared up again. but his mouth looked great, it was only an ear infection and we were thankful for this. he has been having his ear meds twice a day for 5 days but marvin was not bouncing back and getting out of bed. I thought he was reverting to his post traumatic stress behaviors because marvin was terrified of being in pain or sick so I wasn't too worried. I thought once his ear settled down, he would get back up and start moving.

Dionne phoned me just as I was leaving work..marvin had not eaten today, he had a choking/coughing fit this afternoon and now his breathing was labored. when I got home, I checked him. he was dehydrated and his breathing was rapid..i thought about making him wait to see the vet until tomorrow, but my gut said he should see someone sooner. I packed him up and took him over to emerg and the xray showed a plueral effusion, lungs full of metastatic tumours and the vet guessed the primary source was most likely lymphoma.

marvin passed peacefully away in my arms. he was 8 years old.

rest in peace marvin, you were a very brave yet gentle cat.

I saw Marvin when I went on a SAINTS tour and fell in love with him! I sponsored him the last few months and am so sad to hear of his passing. But I am glad he spent the last 18 months healing and relatively pain-free. Sorry to hear about his loss - much love!

carol, can u email me please,,, vanstreetcats@gmail.com

he was an owner surrender maria...we never knew he was from vokra, his owner did not tell me that. anyway..there was no doubt that she loved him, but she did not believe in traditional vet medicine and that became a huge problem for him.

How did Mushmallow get to saints? he was a vokra cat that got adopted... What happened? I would have taken him back into vokra and had his teeth removed. I am just devastated

I'm so sad to hear about dear Marvin... Tammy, you gave that cat so much love and treated him like royalty It was lovely. Peace little Marvin...

I am sorry to hear of the loss of your beloved Marvin. He knew nothing but love and tenderness from you and that is what his heart was full of. He will be waiting for you at Rainbow Bridge for certain - that much love and devotion on both sides never goes unnoticed. Until you both meet up again - have nothing but happy memories. Sincerely

On a completely different note: A belated thankyou to Ann for arranging and organizing the Christmas dinner and get together for the Saints volunteers and staff on Sunday night. The venue was lovely - food was delicious, and the Secret Santa part was fun - even tho I wasn't completely sold on the idea of "stealing" gifts. Who did finally end up with the duck wine holder?? Penny I think. It was great to see so many folks there. Sorry I had to leave before the picture taking but I had a long drive home. --Thank you to Allison (Ann's daughter) as well. Nice job.

i aam so sorry for your loss carol and tammy life sometimes just sucks and this is one of those time. rlip little marvin i do know you were very loved.

I didn't know Marvin's story. He looked so happy in the bunny area
last time I saw him. So sorry for Tammy too, he was a lovely cat

Marvin knew he was safe and loved in your arms.
Sweet dreams little grey cat, there is no more pain for you in heave. Sending hugs to everyone at SAINTS.

yes what a road he traveled from his beginning at Saints to his last couple really good years....with great vet care, lots of food and many special friends... Marvin knew that he was loved.

Oh no....Marvin was such a sweetheart and such a gentle soul. I loved watching him sit on Tammy' s lap and love his
time with her. RIP Marv, your meows and presence in our area will be missed

So sad that he had such a short life at least he had love in it. RIP Marvin...you meant at lot to many and will be missed.

Marvin had been through a lot in his young life, yet he was still such a sweet and gentle cat.
Anyone who knew Marvin and had him as a friend was lucky.
I'm going to miss looking into his beautiful green eyes.
Life really can be a bitch sometimes.

Oh no! Poor guy. So sorry Tammy!
My favourite part of the Saints video that was shown at the auction was the part with Tammy and Marvin.
Shelly: you're going to hand feed the cat?
Tammy: oh, no, I'm just holding the bowl for him while he eats.

I'm so sorry to read this post. Tammy, I know how special Marvin was to you -so very sorry. Wow, you just never know what is going on behind the scenes sometimes. Very sad after all he's been thru. RIP Marvin, hugs to you Tammy.

That's so sad he was a lovely boy, big hugs to Tammy I know you will be heart broken......... sweet dreams Marvin.

Oh no, not Marvin! He was loved by so many. He only recently came to live in the med room/bunny area, but we really enjoyed having him around. He seemed so happy in his new surroundings, where he had more room to roam and interact with us. Rest peacefully, sweet, lovely boy - you will be missed.