previous saint tucker has passed away. 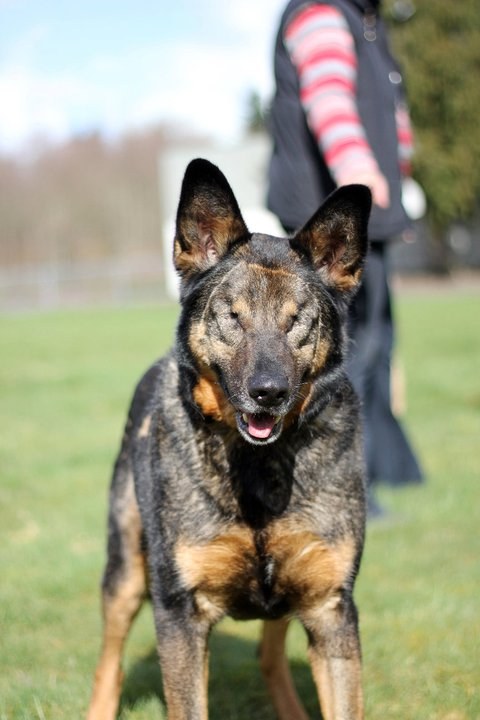 know it has been four years and you have seen a thousand animals in the mean time but I couldn’t help but write to tell you that yesterday we lost Tucker the blind German shepherd we adopted from you in 2011. He was as close to being the perfect dog as any dog could have been. He never let being blind stop him from doing anything. We traveled to the interior many times where he would sit patiently in the golf cart as I slashed my way around the golf course. I swear I could hear him whisper “Thank God I’m blind buddy because your game sounds like it sucks.” He loved the heat of Osoyoos on our yearly trips there as well. But perhaps he was at his best on our trips to Tofino. There he would run along the shore lines at full tilt barking and bighting at the waves. Not bad when the waves were chest high but in Tofino some of the waves were twice his height. But that never stopped him. He’d be wept off his feet and come back spitting out seawater and seaweed and start chasing the waves again. After a few minutes of this everyone on the beach would come down to watch this ‘crazy’ dog and ask what he was doing. I’d ask if they saw the Tsunami warning sign posted in the area. Then I would say he was protecting the western world from those killer waves. “You’ve notice in the three days that we have been here not one wave got off the beach.” His first year he bowled over a young boy who was dipping his bucket in the water. Before I could apologize to his mother she yelled at me “Is your dog f----g blind?” Now remember Tucker had his eyes removed. I looked at her then at Tucker and said “By the way he is.” She shrunk like a rose in a rain storm and never said a word. He was diagnosed with TCC last December and thanks to the wonderful care of Dr Janice Crook at the Mosquito Animal Clinic and Dr Sarah Charney at Boundary Bay he was happy and active right up to the last hours. I am not sure if I can ever adopt again after Tucker but I will never stop telling all who will listen that just because a dog is labeled as special needs and or a senior don’t overlook them. They can give just as much love as any puppy with all the working parts. Maybe more.

rest in peace tucker, so lucky to be so well loved.

awww i remember tucker too and i remember u taking him. that was a happy day im glad he spent his final years with you.

What a beautiful story. I remember when Tucker went home with his family and can't believe it was 4 years ago. What a great life for the last 4 years. Rest in peace Tucker.

I didn't know him, but he sounds like he was a lovely
dog and a big part of your lives. You were lucky to have
found each other.

I remember him too he was such a lovely boy and the photos you sent in after he was adopted. What a fantastic story, made me laugh and cry. Big hugs to you..........sweet dreams Tucker you were the best!

Your comment on "special needs" is so true. No one will ever know until they have experienced.

Yeah, I sure remember Tucker too....what a wonderful like he enjoyed with you guys...Wow, thank you for writing this beautiful tribute to a very special dog.....RIP Tucker

Remember Tucker of course.....I was fortunate to have met him.....what an amazing dog he was! So glad he stole your heart and "lived" out his life with a family who embraced how special he was......RIP dear boy

Wow, that is beautiful. I remember Tucker, sounds like he made some people very, very happy.

I remember reading about Tucker, what a wonderful life he lived with his "adoptives"! They will be missing him so much.

What a lovely tribute to your very special boy - rest in peace Tucker.

What a wonderful memorial to Tucker - sounds as if he enjoyed life to the full and was loved so much. Rest peacefully beautiful boy.