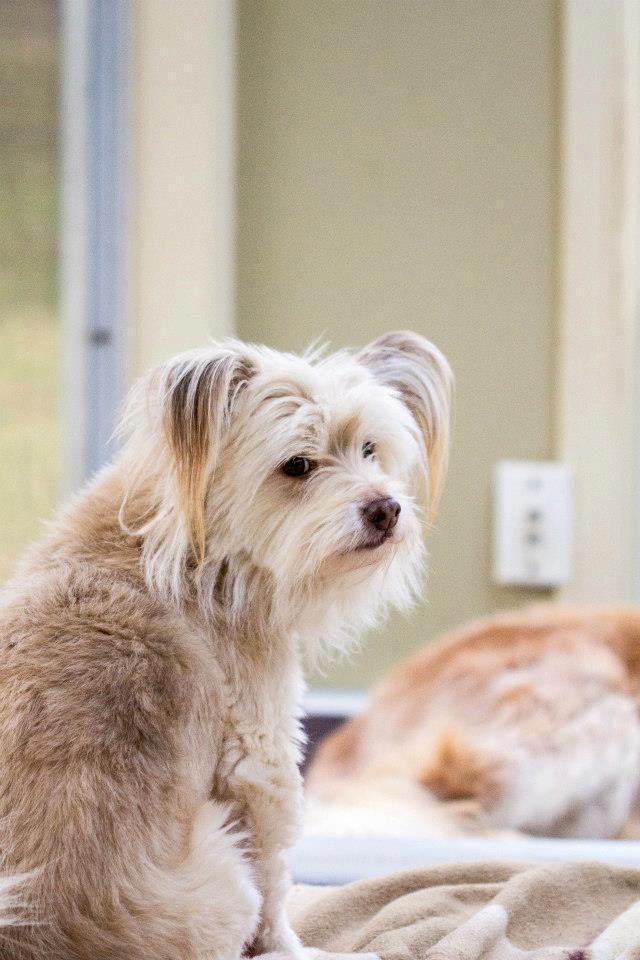 andy came to saints almost 11 years ago. i still think of him as our wild little boy but currently at somewhere between 13-15 yrs old, he is a little wild old man now.
he and several other similar dogs were all running loose. LAPS picked them all up, got their matted coats clean and shaved, had them vet checked and spayed and neutered. they guessed they had all escaped from BYB or a puppy mill. all of the other little ones were somewhat social and adoptable but not andy. he was terrified of people, he bit 5 staff members while he was in the shelter, the last one required tendon surgery.

andy was sent to saints with the understanding that he would be a permanent resident, never up for adoption because even tho he was terrified, he really wasn't very safe.

so here andy came...we did try to socialize him to reduce his human fears but he just felt pushed into an inescapable corner and withdrew and shut down into a catatonic state. in the end we decided to let andy be andy and not to push him over his comfort zone again.

eleven years of loving a dog who not only didn't love us but one we couldn't touch. twice a year we sedated him and sent him into the vets for further sedation so he could be checked over and groomed. and these vet visits were still always highly traumatic for him. andy did find happiness here, but not with us..his family was the other dogs. he had many love affairs with dogs who have all passed away now...lexi, cole, copper, al, jesse and ewok...from andy's point of view..all of them were his very best friends and he always felt safe with them.

andy got quiet after ewok's death last week...we thought he was grieving and he probably was, but he was also sick and none of us knew because we were never allowed to touch this dog.

the other day he didn't want to eat and then miracles of miracles...he let the staff pet him. the second their hands touched him they knew he was sick, he was just skin and bones under his fur. he went to the vets without sedation, the vet was able to pick him up, check him over, AND do bloodwork...all without sedation. his little heart was racing, it was tachycardic...heart disease or simple terror that he was just too weak to do anything about?

andy was last at the vets in May of 2015, barely 4 months ago...his bloodwork then was unremarkable and his weight was good at 14 pounds. now his bloodwork shows that andy's liver is failing and he has lost a third of his body weight, yesterday he weighed in at a mere 9 pounds. maybe it is an underlying cancer that is bringing andy down?

i booked his euthanization for this afternoon. given his level of fear and his emotional fragility, we just couldn't put him thru further diagnostics, it wouldn't be fair and he was so weak and sick.

in the end i just couldn't do it, andy still somehow had that spark in his eye that said he wasn't ready to die so this morning i cancelled the appointment.

good thing too because today andy started eating again, he ate really well. today kevin was able to get all of his meds into him that may for a time at least, help him to feel better.

ahh andy, you wild thing, our disney dog who somehow while totally ignoring us, refusing all of our offers of friendship, still managed to steal all of our hearts.

we love you andy, please be well for awhile more.

He stays with the bed buddies... The tour guides let visitors know that Andy does not feel comfortable with people and to give him his space and leave him alone. Everyone is always very respectful when they hear of his need to not be stressed.

Just out of curiousity, where does Andy go when the tours come through? I would think he wouldn't be thrilled with that, or do the tour leaders just let people know to give him his space and that's enough? I was also glad to hear he has a bit more time yet.

Oh, I'm so glad I will see you tomorrow Andy.......grateful for your intuitive heart Carol, to give him a bit more time.

He is so bloody adorable. Saw him on the tour this summer and he's as cute in person as his photos!
I hope his doggie friends pull him through a while longer.

Omg. I was bawling then I read the rest of the post. See you tomorrow Andy :D