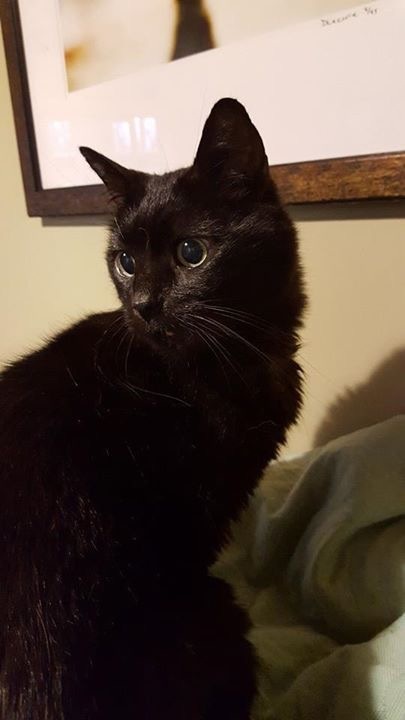 oliver went out into permanent foster care yesterday...he is so ancient now, i am not sure how much time he has left but i am really hoping it is enough to make the adjustment from here to a gentle and loving home of his own. change of even simple routines is hard on the really old ones but oliver is such an optomistic, positive thinking dog and with only old age arthritis, his medical issues are minimal, i think he will do well. fingers crossed.

the new cancer cat, kale..is lovely. such a very sweet boy. note to all..he has cancer of the mouth so he is being fed multiple times a day with soft, easy to eat canned food. if you go past and see an empty bowl, please refill it for him...he can eat as much as he wants.

2 new incoming...the old blind chow arrives tomorrow from SARC. and a new highly anxious collie/shep? tripod arrives from DHS today. not sure of the old chow's name and back story but will let you know when i hear. the anxious girl has a very sad story which spans a few years.

her name is now lady..it was oakley once upon a time. she once belonged to a family in toronto who surrendered her to the shelter when their children were born, apparently she was over protective of her new small family members. she was then adopted to someone who subsequently moved to salmon arm. he eventually surrendered her to the shelter there because she had developed anxiety and it was too much to handle. her next adoption was to a family who then moved to delta, here she was chained outside, dirty and full of fleas. her family elected not to re-claim her when she was picked up by AC. the staff at delta say her anxiety level in the shelter is threatening her well being. she is unable to settle even when kept with the staff, it is heart breaking. there is no history on how or when she lost her leg, but whatever, it probably was another traumatic event.

her story is so similar to so many discarded dogs....they too live the story of black beauty. too many of the wrong kind of homes to suit their sensitive personalities. and this is why those massive adoption events like we just saw in vancouver are so cruel and unkind. we think in terms of fairy tales and happily ever afters...and we do not want to know or accept that these animals stories rarely live our happy plans..they just get hurt over and over. we are the ones who set them up to fail.

we have had a few of these pushed over the edge unhappy beings whose lives have become so entangled with loss, abandonment, and betrayal that they live lost in a sea of terrified uncertainty.
good dogs, trying their best to satisfy us but falling short more and more each time as the results of their chaotic lives takes its inevitable toll.

so sad to see these sensitive souls overwhelmed and lost due to no real fault of their own..just the wrong dog in at least 3 of the wrong homes.

i hope the recent "rescued" 100 are not lost in that sad frenzy of human fairy tales and heroes...too many already share the same unhappy fate...

yes rescue, yes adopt but do it with compassion, commitment, respect and an educated dose of actual knowledge.

they don't need us to add to their unhappiness problems.

thx for the info sheena! name change tho..too many saint max's and mac's so i think your guy will be our very first Matt! should be close enough not to confuse him.

The Chow is named Max - his owner left the country and left him behind with a relative. He keeps getting impounded so this last time the relative said they didn't want him back. He is not blind, but has some vision impairment we are told :) Apparently he is about 12 years old and he is very nice! Thank you for taking him!

Yeah for Oliver and his new family