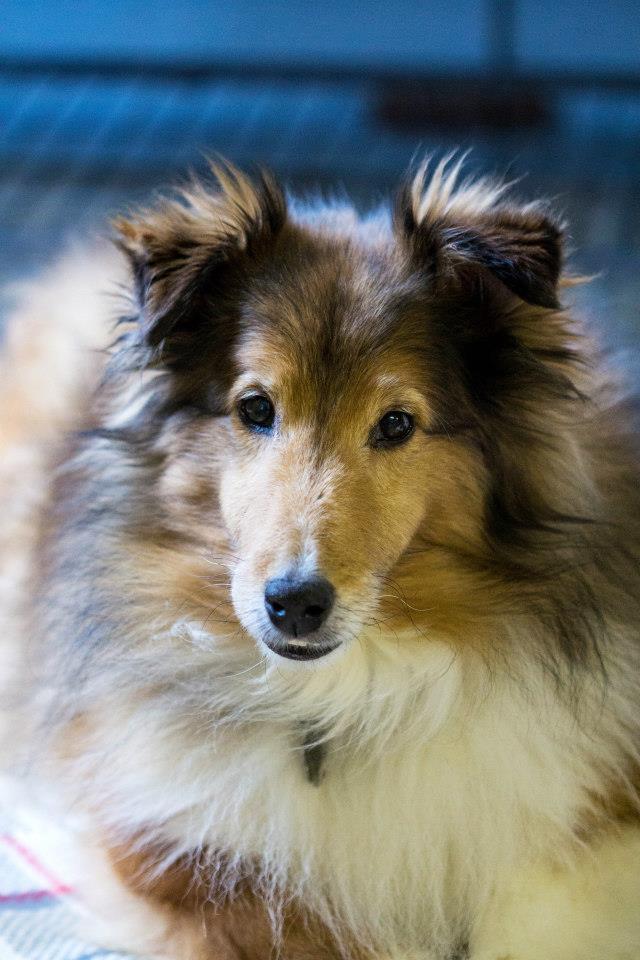 this was written by erin a year and a half ago about her much loved foster dog.

I am not at work yet so I have no morning updates. I have no idea how any of the Saints are doing right now. Oh wait, yes I do, theres one sleeping right beside be. I took Cece home as a permanent foster last November. On a vet visit the staff noticed she had a breeders tattoo. They shaved her so I could read the tattoo and trace it if I wanted. So I did. How does a purebred Shetland Sheepdog end up at a shelter? Cece came to Saints after she was rescued by the SPCA, her owners had packed up and moved away without her. The cruelty officer found her waiting in an upstairs bedroom, alone. These people had had numerous complaints placed against them over the years, mostly for inadequate conditions for the dogs. Anyways, at 14 years old, deaf little Cece was not a great candidate for adoption from the SPCA. Enter Saints. Cece lived at Saints for nearly a year before I brought her home. I promoted her on petfinder, shared her on facebook, nothing. No interest. Why didnt I take her home earlier? Because I had my beloved Bear then. More on him later. After Bear passed I got involved with a paraplegic pitbull named Frankie, who was going to be surrendered to Saints (then fostered by me) but his owner ended up just needing some support. A paralyzed 70lb dog is a LOT of work, especially if you are caring for him alone. Frankie is doing awesome btw, I am always in touch with them. I dog-sat Frankie for most of November, the week he went home I asked Carol for Cece. The breeders tattoo is from a highly regarded, award winning kennel. This kennel kicks ass and takes names in every competition they enter, year after year. Her name when she came to Saints was CC. Turns out, those are her initials, shes really Celestial Comet. So I wondered why my little Sheltie was sold as a pet, instead of winning ribbons. Sold to assholes no less. I looked up the CKC Breed Standards. And I quote “the deep, well-developed underjaw, rounded at chin, should extend to the base of the nostril. Lips tight. Upper and lower lips must fit smoothly together all the way around.” Cece has a perpetual smile. So ok, she will never win a pretty blue ribbon. But it was her smile that captured my heart.

cece was almost 17 yrs old at her journey's end...
rest in peace cece, you were loved and cherished.

hugs and great thanks to erin and family for loving this sweet little smiling dog so well.

So sorry Erin and carol. Cece was a gorgeous girl and so lucky to have found Saints and Erin.
Rip sweet girl

So sorry Erin. RIP Cece you were loved

Erin, my sincere condolances. Cece was a beautiful girl. So glad the last of her forevers was spent in the circle of your love.

So very sorry Erin. CeCe was an amazing treasure, and I am so glad she stole your heart. You gave her everything she deserved and more.

Loss sucks! However the time CeCe spent in a loving home and the time you had with a great dog is a lasting treasure.RIP sweet girl

So very sorry Erin..CeCe finally found true love with you and your family. She will rest in peace now wrapped up in that love.

So sorry Erin and family. She was a wonderful friend, RIP beautiful girl.

Oh Erin, so very sorry......CeCe won the lottery getting to be part of your family.....hugs to you...I know your heart is breaking right now....you will see your girl again..and she will be ecstatic.

So sorry Erin big hugs to you ......sweet dreams CeCe

sorry for you and your family Erin

So sorry Erin. She was so happy with you and your family ❤

Very sorry for your loss Erin...😢

So sorry, Erin. Hugs to you and your family. Rest in peace, CeCe.

Thank you for making CCs final years the BEST years. She'll be waiting for you

So sad to hear this, Erin. Cece was a gorgeous dog. She was lucky to have had a home with you, and have you beside her at the end. I'm sure you were her dream home.

Im so so sorry Erin, CeCe was a fantastic dog ):