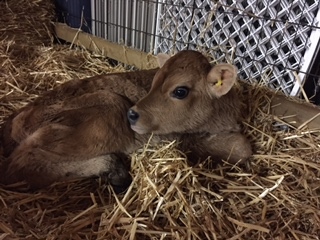 first of all..i don't want this post to turn into a rabid vegan vs non vegan discussion. all i want is to tell a sad story because this story deserves to be heard.

a young family decided to start a small hobby farm and were in the process of experiencing and learning about sustainable family farm living. they came across some newborn calves for sale and went to see them. there were three couple of day old jersey calves, 2 bull calves and a little heifer. they thought the babes looked sickly and poorly cared for but the farmer said if they weren't interested in taking them, they would be shot in the morning.

these babes at birth were taken away from their mothers, not given that first all important colostrum feeding, nor were their umbilical cords cleaned with iodine. these calves were absolutely worthless and not worth any kind of care.

the family took the babes home, started bottle feeding and medicating for scours (calf diarrhea, preventable by just a couple of colostrum feedings.)

merry died first, she had a cough which most likely progressed to pneumonia. chris while having the scours, held his own and was doing ok. but little moose got weaker and weaker and soon could no longer get up or walk on his own.

this was the point that i heard about them and realized this family had been taken advantage of, sold newborn calves that were already doomed. they had never had newborn calves before and did not know about the dangers these discarded and unwanted babes face on some of the not so great farms. i contacted them and offered to help which they gladly accepted. so we called our vets and asked them to go out which they did. moose was too far gone..what had originally begun as a umbilical infection from being unclean and most likely born in filth at birth had progressed to septicemia and invaded all of his joints to the point where there was no longer any hope. our vet gently euthanized him in his bed.

the kids were all pretty upset, crying and sad because they worked really hard to try to pull him thru. but it was just too late for moose.

tonight the family brought chris here and we will welcome him into our cow family and provide for all of his care. we already have a chris here (one of our chickens) so we have changed his name to norman little foot (in honor of norman from city slickers and little foot the lost little dinosaur who finally found some friends.)

there are millions of trails of tears shed by innocent days old calves. they have no value alive and their deaths are not gentle or kind. calves who have value are raised, sickly, sterile or male calves are simply just thoughtlessly tossed away.
they are birthed from their mothers bodies then taken away to which ever fate is theirs. and they face that fate alone..newborn babies..to live and produce or to falter and die. that is their cycle of purpose in life.

norman little foot is now about one week old..the only one of the three who thus far has survived the harshness of 7 days of life.

such a tiny baby to face such a monsterous challenge just to live.

norman is going to be looking for some loving calf nannies to come and spend time with him. he is currently isolated in our shop and will not be able to join his new cow family until he is stronger. if anyone is free to come and nuture and stave off loneliness for saints newest tiny baby..it would make him really happy.

rest in peace merry and moose, may the gods be more merciful in your next lives.

EDITED TO ADD: The request for volunteers was meant for the existing volunteers. Sorry for the confusion.

Very sad to hear, and greatful for you to help these calves. Maybe there needs to be something done that these farmers have to be a little more mindful of how they take care of the calves they dont want. Im sure theres a kinder more humane way to take care of unwanted calves. Times are changing and these things need to change. Sigh...... ❤️

Completely Off Topic, been meaning to post a pic of Winter Wonderland Saints from Sunday. Obviously rain, sleet or snow will keep Chloe from hiding out in the cat run (And eating her treats):=)

hi leah...newborn dairy calves are always removed from the mother. females are given one or two feedings of mothers colostrum milk prior to removal to give them the necessary antibodies to grow into adulthood and eventually join the herd. those little huts everyone sees that thinks they house veal calves are mistaken..those hold the healthy heifers to keep them free from infection and make it easier to bottle feed until they are big and strong enough to go into the juvenile barns to finish growing before breeding and milking lives begin. bull calves do not get the luxury of a private hut. they usually get put all together in cramped quarters..and i can't remember if the law says they can't go to auction before they are one week or one month old..but whatever..lots show up at auction with their umbilical cords still attached and sometimes the auction folks turn a blind eye. veal farming no longer makes money because many folks no longer eat veal. so feeding and raising the bull calves up until 3-6 months old to sell on a losing veal market does not make much financial sense. most times the male calves simply die of illness..sometimes the very young babies if they are a decent size/weight will be bought by the meatman for dog/cat food..sometimes no one will bid on them, not even for 2 bucks because they are just too small or too sick and they are supposed to go back to the farms but generally end up in culled kill piles. that is the reality of dairy farming in this century...its not like it was a hundred years ago where the calf and the human shared his mama's milk until he was old enough and big enough for slaughter.

all baby dairy cows are orphans at birth.

So I'm stunned to learn this is legal? And what I think Im reading is that this is acceptable to an industry?
I'm trying to fully understand what I think I'm reading.
(Not wanting to debate, I'm looking for information because I can't believe this happens in Canada).

Spent some time with Norman today. He's SO adorable! He loves being petted and cuddled, and he gives "cow kisses"!!!! He's totally captured my heart and will do the same to everyone else, I'm sure. Praying that he pulls through and can enjoy a wonderful life at Saints.

Hi Cathy The shelter is open to the public from 9 AM to 12 PM. Thank you for the donations.

Sad stuff. Off topic here but could someone please tell me if donations can be dropped off besides during Open House hours. I have a big bag of towels, etc. but might not be able to drop them off during those times. Thank you.

Hi Irene. Sorry that the blog was unclear but the message for volunteers to feed baby Norman was for existing saints volunteers.

Norman is in good hands. How dare that man call himself a farmer to bring calves in the world the way he did. Life is already hard enough for all.

Will make it up each day starting tomorrow as soon vacation. Anytime or

Love love love his name. Perfect for such a sweet wee fellow...

Do you still need help clearing out the middle of shop today? He looks very sweet, and has had such a rough start. I look forward to spending time with him.

Did you take the photo and post it on the blog Carol?

OH, how I wish I could come out this week; but I'll have to wait till Sunday to meet Little Foot.....reminder of how cruel the world can be....so happy Norman is at Saints and will only know loving hands...feel so badly for that family...what a shame..thank you Carol for stepping in and showing them there are kind, compassionate people with expertise who can help little Norman.

I will be there and goddamn I didn't read this earlier. I'm sorry little "Norman little foot". I could of helped today

Heartbreaking - life can be so cruel. Welcome to Saints little one. There will be a whole lot of people sending loving thoughts to you - please pull through. Will try to make it up to see you during the week.