a sweet little waif fighting for her life. 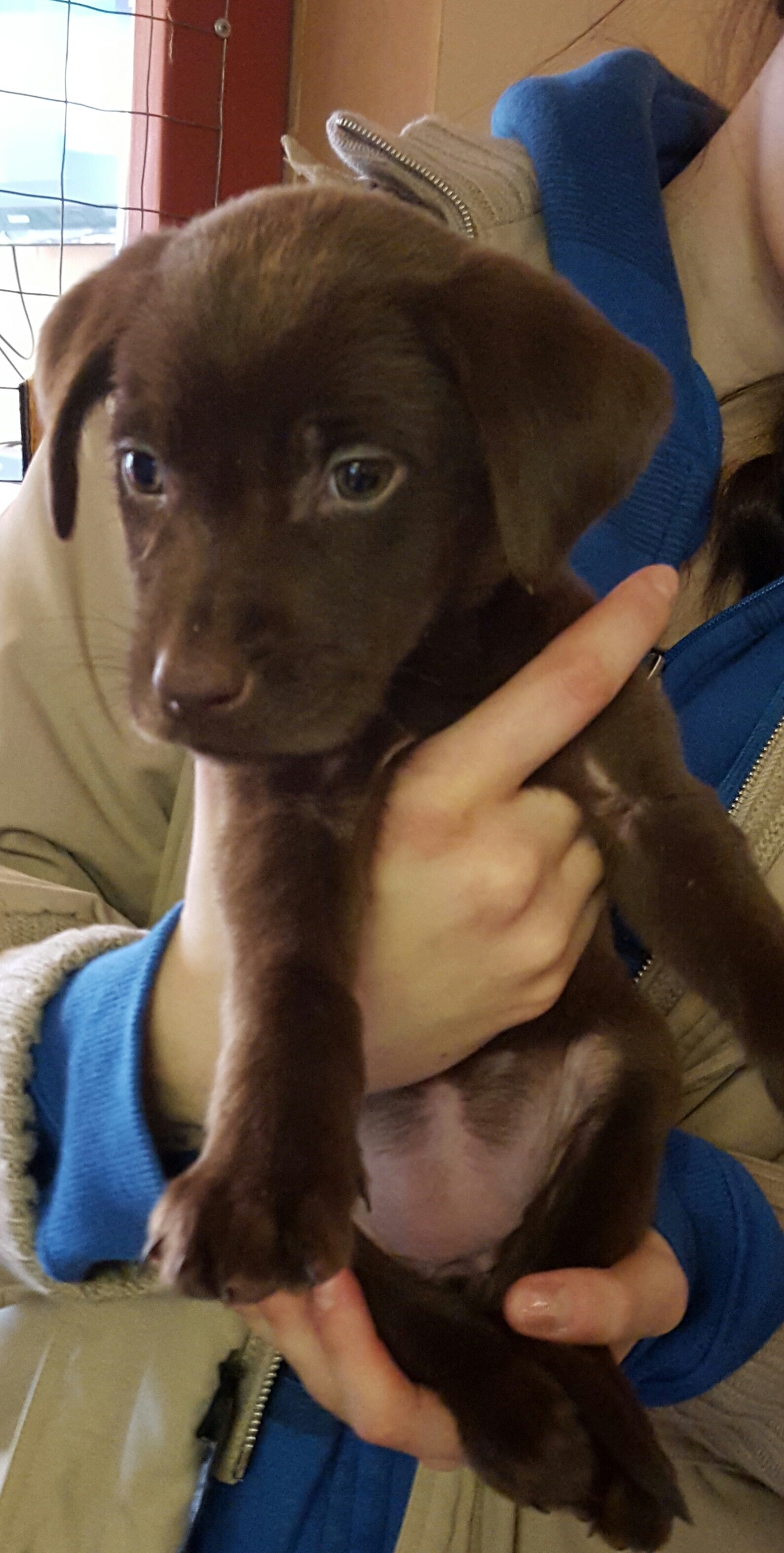 paige was born 8 and a half weeks ago, an adorable tiny PB chocolate lab. she was purchased from the breeder last week for $750. she was the runt of the litter, it was assumed she was losing out in the nursing competition against her bigger and stronger siblings. hopefully once on her own, she would do better. the young ladies who purchased her noticed she seemed to be vomiting a lot so they took her into the vets and it was discovered that paige had the worst case of mega esophagus that the vet had ever seen.

there are two kinds of k9 mega esophagus..both of which are relatively rare. one is a congenital defect that shows up in very young puppies where a band of the aorta breaks off and wraps around the esophagus causing it to malfunction and stretch. the second is called idiopathic mega esophagus, it strikes older pups and adult dogs usually between 1 yr old and 7. no one really knows exactly what causes it.

the puppies affected by the congenital defect can possibly be repaired surgically..they have to split open their chest and go into remove the band and then the esophagus can return to its normal shape and heal. it is actually a fairly dangerous surgery because the pups are so tiny and it costs thousands and thousands of dollars.
the older dogs with the idiopathic type can usually be managed fairly well thru out their lives by feeding them upright in a special bailey chair that positions the esophagus to keep it open so the food can slide down into the stomach unimpaired.

whatever..either scenario is workable but one is grossly, bankrupting expensive and the other is a huge life long committment for every single day, forever.

both of these options are beyond the means of these two nice young women.

they called the breeder and today the purchase price was refunded and the puppy was surrendered to saints and we will do whatever she needs.

paige is in worse shape than we thought. she is severely stunted and dehydrated. she is at the vets already for medical support and having more diagnostics done.
so far on xrays..our vets can't see the band. she is having a barium series and the results will be sent to a radiologist to see if she can see the missing band.

if there is in fact no band there, then paige is in serious trouble because she cannot be repaired surgically and despite proper positioning and food consistency, the food cannot get past the grossly huge pocket of non functioning esophagus in there. if she doesn't aspirate and die from pneumonia, she will continue to fade away from starvation because she can't get any nutrients into her.

the vet doesn't sound very hopeful, in fact he sounded truly sad but he will do all he can to help her if he can.
paige is a tiny, sweet, adorable waif of a puppy who may not stand a chance.

Prayers for you sweet Paige....

Oh god choc labs are my soft spot. I will pray for her. She must be a fighter to have made it this far..with SAINTS help and all our prayers and positive thoughts I believe she will pull through and one day be a happy goofy lab living it up in her forever home

If the breeder was smart…they should have taken her to the vet to get checked out and not sold her for $750. She's in good hands now :)

So much for a little puppy to deal with....prayers ensured for Paige.

I got to meet her today and she is adorable, fingers crossed that she can be helped, she is so tiny and helpless.