the face that breaks a thousand hearts 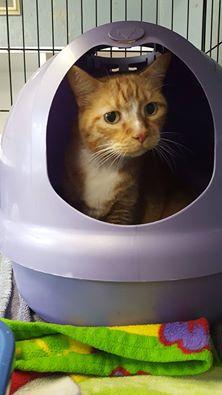 his face broke my heart when i popped into our facebook page and saw his photo this morning.

there are a few things about leo that upset me...
1. getting the call on a phone that has a number not available for public access so i can feel safe in answering the phone and not dread another heartbreaking phone call, phone calls that never end. finish with one and ten more are waiting for a return call to help them.. most folks don't know that we have literally not answered the house phone for years..it is there for us to use in emergencies..if or when it actually works. but we don't answer it...ever. thats how bad answering the phone of a rescue actually is.
folks would need to understand the thousands of "i can no longer keep my pet" phone calls, i have had to listen to over these many years.

2. it especially upsets me when given two options and both options suck....take in another peeing cat losing his home when we already agreed to take in 3 other actual homeless ones this week which filled all of our spaces..or...he will be euthanized today. it really is unfair to have to choose between either choice.

3. leo's current bewildered fear at his sudden appearence in such a strange place... bothers me a lot.

however...there is a reality to this situation despite the upsetting parts.

house peeing cats cause damage.
finding solutions to either medical and emotional causes is not only hard..its not always successful, despite what others say..
finding homes for peeing cats is pretty much impossible and most shelters don't want them either. some folks may deal with their own cat who pees..but no one goes looking to adopt a known inapprpriate pee'r. that happily ever after does not live in reality very often, if ever.

i have three of my own cats...i adopted them knowing they are chronic sprayers..but i also live in an animal shelter set up to deal with this.
i will not be retiring and moving permanently to my cute little cedar walled retirement cottage until sunny, tang and conan pass away from old age. there is no way on god's green earth that i am letting conan the barbarian pissing cat or his incorrigible brothers near my interior wood lined walls.
and so for now...here i will stay.

so if i am not willing to let maniacal pissers wreck my sweet little odor free cabin...who am i to judge?

i don't judge the result. i judge the process.
did the cat go to the vet?
what things were done to minimize the spraying?
how committed was the family to finding and following thru with solutions?
and once defeat after a hard battle became the reality..what care and research went into ensuring the final solution..shelter or euth. was worked thru to ensure the best interests of the irrepairable spraying/peeing cat?

it is not just as simple as ok..now you are dead. or... off you go, yay...i found someone to take you.
dead is forever, there is no going back. and pick the wrong someone or a shitty rescue and death might even be better.

the real problem with peeing cats is...they honestly put the majority of human beings, over the sanity edge. cat piss in people's homes drives them around the bend..eventually, some sooner, some later..they lose it and it becomes a life altering crises with just one piss too many.

that is the problem with these very at risk cats..they piss on a bad day, when their human is already overwhelmed and boom..the cat's world is suddenly irreversibly turned upside down.

i guess if they are lucky, like leo..they end up here.

but so very many aren't as lucky as leo...and leo doesn't think he is all that lucky anyway.

i guess the only real solutions are...

try really hard to find a workable solution to family cats who spray.
but also support and encourage your local reputable shelters to take in some of these unadoptable pissing cats if they possibly can (they make good office buddies if you keep some windex and paper towels by your desk)...the reality is...it is the only hope most of these cats will ever have.

I hear you re not answering the phone. Currently I am at 504 missed calls.
I have to screen the messages and decide which ones we can or can't help with 😕

I saw that little worried face on FB last night and when I looked at the post again this morning I saw a mass of judgmental comments and it bothered me. Really not helpful to Leo. I've had two out of box peers in the last few years and it is not fun to deal with but not impossible. One sprayed on the pheromone plug in I had in the living room. I watched him do it lol! It was naive of me to think that would work on a lifetime sprayer. I had both cats vet checked before they came to live with me so I knew it wasn't a bladder infection. Each had a different reason for out of box peeing and once I finally understood that it became easier to manage. It was brutal the first few months though. It took a lot of work (lining every cat bed with a pee pad under a fleece and a shower curtain on my bed!) and patience on my part. A client of mine surrendered her frequent spray and pee out of box cat to VOKRA and when he went into a foster home he didn't do it at all weirdly enough. I'll be sharing Leo's photo and FB post on my community page Feline Fancies.

I have a sprayer (Squid) and a pee-er (Babe Ruth). For The Babe who started peeing outside the box when he was diagnosed diabetic I put down training pads in his usual peeing places. Squid will spray on anything fabric that is in bum range or any bag or box left on the floor. So I no longer have curtains down to the floor and religiously wipe down the ottoman and his normal spraying places. It isn't nice but you live with it.

I provide ideas, options, things to try when I am contacted regarding a peeing cat. I was not contacted about Leo. Also, he has no vet records. In 2003 he was neutered, tattooed and declawed. Hasnt seen a vet since. This tells me that a workable solution was not looked for. Wash hands, walk away. I have a cat who never uses the litter box so I feel I can actually say...even IF its a chronic thing, its really not that hard to deal with (of course peeing and spraying are two very different things)