oh my gawd! shelby is the stubbornest of all stubborn dogs!!!!! 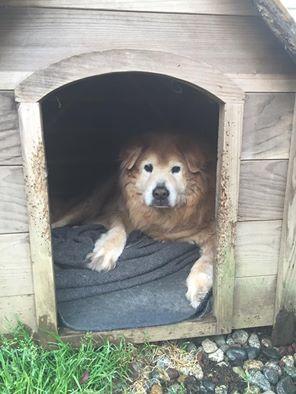 you can't even compromise with her, she just layers on the guilt til she gets her own freaking way!

so for the first couple of nights i dragged her in but she has figured out how to slip a noose over her head.
then i let her sleep out for a couple of nights but left the door open so she could come in if she got cold and i was right.
but that meant the other computer room dogs got to freeze off their butts...laddie is frail and kassa is old as the hills with a really short coat.

i made erin put a blanket lined large crate for her out on the covered porch away from the wind and weather as a compromise and turn the dog house around so she couldn't get her tubby butt in but she still managed to squeeze in the 3 inches between the door and the poop bin. she won't even look at that crate.
i was still bitching about shelby and the gawd damn dog house this morning so erin flipped it right around and shoved the door right up against the fence. there was NO WAY shelby could get in there..haha..i finally win!!

so shelby went out and laid IN THE ROCKS next to the dog house for the past 2 hours and would not move one single inch.

i returned the dog house to its proper position, tossed in some rubber matts and a warm fleece and shelby climbed right back in.

she is worse than a beagle..you can change a beagles mind with bribes...shelby not only will not be bought but she very clearly says "mind yer own freaking business!"

and she looks freaking homeless out in that dog house, alone in the yard.... which totally bugs me!

Carol, I am thinking Shelby is stubborn enough to get you to join her in her quiet little cabin. No one to disturb either of you or wake you up in the night....

Could you put a tent out and put the dog house in the tent? Then it would be protected from the elements.

it won't fit thru the door to the covered area mary but it was a great thought!

What if you move the dog house to the covered porch? You two could meet in the middle.

Hey it's her cabin, you know how that is! LOL

maybe she is a "loner" and likes to sleep in her very own house. Give up, Carol, you lost this battle!

Actually she does look like an SPCA tv ad. Oh well. You gotta give them what they want.