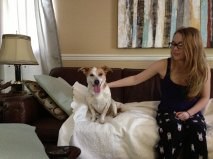 so the first of the waiting in the wings dogs arrived at 4 am..we had originally agreed to take 2 more from the same shelter that caishen, zen and daisy came from which is in the process of closing down. but only one came, the other i heard is staying up north.

so saints welcomes "buddy" a wheaton terrier cross. it was a long drive down here..his transporters left the northern climes mid afternoon yesterday. the rest of the dogs on the transport are heading over to the island so it was just a quick drop off and they were again on their way. thank goodness the weather stayed fairly calm and the storm hasn't arrived yet!

so buddy comes with a bit of a problematic history..apparently he was originally surrendered for biting and he was a bit of a shit disturber in the shelter as well.

we will see who has just moved in here, once he settles. for now he can decompress and rest up from his long trip in an xpen.

he is a pretty damn cute looking dog.

i did manage to squeeze in a couple of hours of sleep in between frequently checking for messages regarding approx, arrival.
i think i am going to be tired at work today tho..too old for this late night rescue shit.

anyway...welcome to saints hairy buddy...sorry but brown buddy, black buddy, white buddy, big buddy, little buddy and lil big bud buddy scooped some of the better buddy names before you came.,,but maybe harry instead of hairy might be more ok?