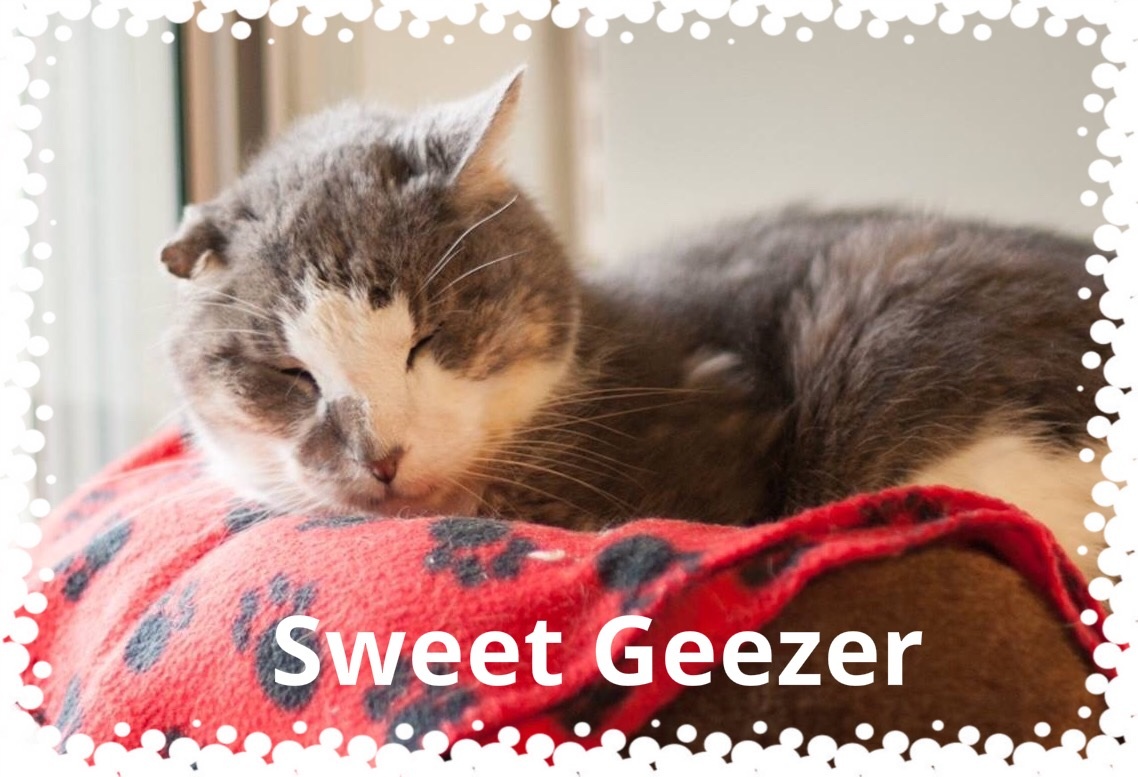 Carol phoned me today as she was driving to the vet with Geezer.

Today our sweet Team House Captain Geezer passed from this world. He had end stage kidney disease and had come to the end of his journey on this earth today. Geezer came to SAINTS in April 2014. He was a lucky SAINT as he came from a home where he was much loved and he was much loved at SAINTS. He was one of the kitchen cats and that meant he got along with dogs, people, and other cats ... what more could one ask of a cat. He was always seemed to be at the end of the counter, near the door, waiting patiently for a head rub.

This is the third year we have had Team Captains. Since death is an everyday reality at SAINTS it has been a priority to pick a captain that will make it through the 1 month campaign. But that didn't happen this year. It is a sad yes but maybe it also okay too as acceptance of death is also a reality at SAINTS. Captain Geezer will still be the Team House Captain in spirit.

Awe sorry to hear of the passing of Geezer. Certainly a unique and sweet cat.
Hugs

Rest well sweet Geezer. I will miss you asking for help to get down off the bed, turn my back & you were right back up there asking for help again. It was always my pleasure playing that game with you handsome!

His original rescue mom Joan would have been so happy knowing her boy
had another good 3 years in the love of Saints caring hands….may they meet again…..RIP Geezer

RIP Geezer, old boy. You were always so sweet, except when I tried to groom you and then you told me off good.

Loved that loving dude. He was always full of personality and one of the first in line on Sundays for treats (next to Fritz of course) Yet another sad day at Saints :=(

I was glad to be at Saints today to see Geezer, and prepare his crate for transport to the vet. Glad he is continuing to be House Team Captain for the fundraiser. You are a noble "spirit" captain Geezer. RIP

I remember Geezer when he first came to Saints and was in the medical room for awhile. Such a gracious old gentleman. Rest peacefully, sweetheart.