duke has suddenly passed away. 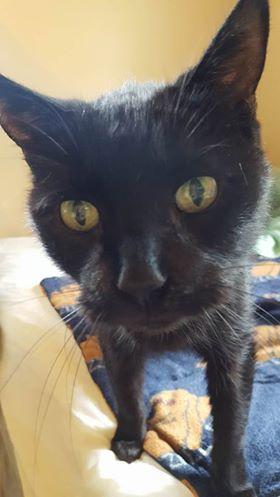 he came here a couple of years ago. he had been adopted out by another rescue about 6 years before that. when he developed diabetes and started spraying in his adoptive home, they tried to return him to his originating shelter but they would not take him back.

poor diabetic duke thru no fault of his own, had absolutely no where to go so he came here.

duke has been a difficult diabetic..it was hard to control his blood sugars...lots of highs and very lows. in the end we kept him on a stable yet low dose of 2 units of insulin twice a day. it did not bring his blood sugars right down into normal range but it did help stave off his occasional dangerous lows.
duke had a dental about a month ago and last week was in for a fructosamine check. this showed that while he still wasn't fully controlled, it wasn't too bad either. the vets recommended we stay on that dose because of his history of going too low.

this morning duke dropped once again into hypoglycemia, his blood sugars bottomed out before he had even gotten his morning dose. we were able to get his bloodsugars back up into the 5.7 range which should have brought him back but for some reason didn't.
the vet put him on IV's, gave him valium to decrease the neurological symptoms, gave him glucose and insulin as needed to stabilize him but he remained in a neurological crises that just would not abate.
by late this afternoon, it was obvious, something else had happened, most likely a blood clot to the brain.

duke was suffering, we could not relieve his suffering and so he was helped to peacefully pass.

duke was very well loved and cared for here, the staff and the volunteers ensured this for him.
he was a sick little cat without a home when he came here but he left here as a cherished member of our family,
we will all miss you duke, you were such a very good cat.

I will miss you our sweet little one. Always enjoyed our visits, you had such expressive eyes. Rest well Duke 💗

Awe I'm so sad to hear :(
When I was in the house before when I had started for a few weeks Duke was one that was super affectionate, and unique with his 'fangs'. Such a great guy.
Gonna miss u too Duke!!

RIP Duke....glad Saints was able to give you all that you needed for the last few years, and end of life...especially love.