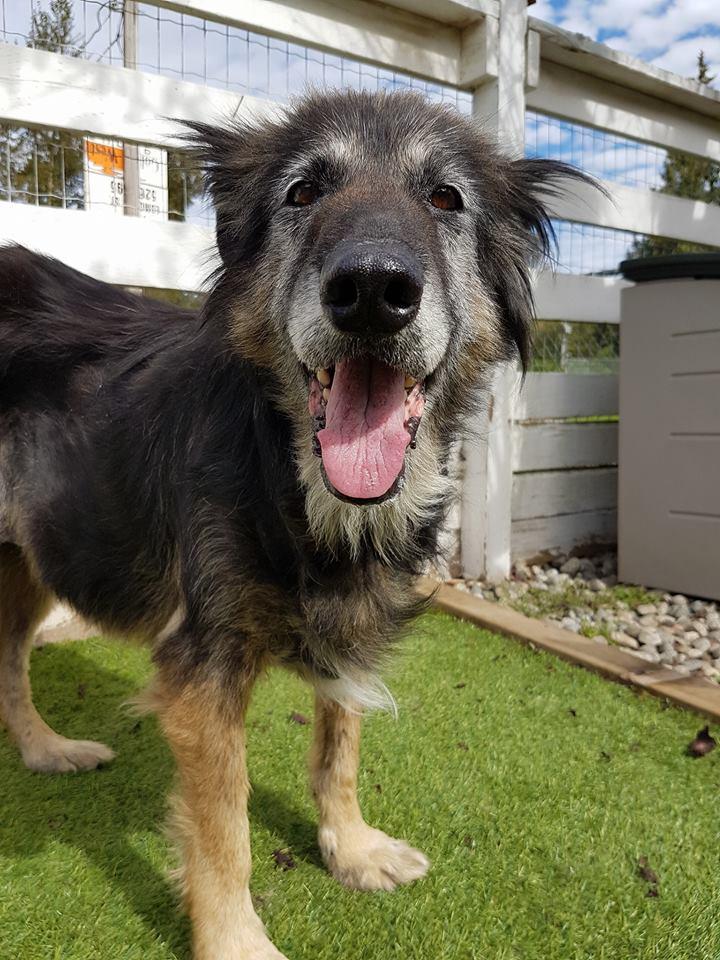 so i decide i better get the big dog room area out for their evening run. i get a bit sidetracked cuz some donut had spilled an entire bucket of water that i had to throw stuff down on to soak up.
finally i was ready..the dogs were poised and ready to leap for the run when i spied keats. shit! i had accidentally left him outside when i brought the computer guys in.
so there before me stood keats...face a-smiling, tail a-wagging, pretty damn hopeful that i was intending his inclusion.

i told him i didn't think it was a good idea, he is far too weak now to toddle down to the pond and stand in the muddy bottom perusing the world and pondering it's possibilities. i knew he would either get stuck or too tired to make it back under his own steam and he is too big and heavy for me.
but he kept smiling, and looking hopeful and i caved in to the wiley old beast.

he made it to the back yard dog gate. he made it to the lower field gate, he made it partway down the hill when he stopped to munch on some cow poop. but he was already exhausted and had to lay down to finish his snack. by then the others had done a few laps without us plus had a quick swim before running back up the hill to join us. and i knew he wasn't likely to make it down to the pond and even if he did, he wasn't going to make it back.

so meanie me slipped a leash over his head and made him come back.
i am pretty sure i heard him grumbling.."i could have done it if you had let me."

so now i am thinking....
maybe tomorrow we can lift him into the back of the van and drive him down to the pond. even if he were to get stuck in the muddy bottom, i could theoretically make one of the staff go in and get him.
now i just have to convince them that that mucky mud won't hurt them and it is part of their job.
seems like a good plan to me...
and keats says he agrees.

We'll just have to put a nice soft bed in the tractor trailer for him. And i recall Mo pulling a dog out of there in the winter, so the summer should be easy for her. lol