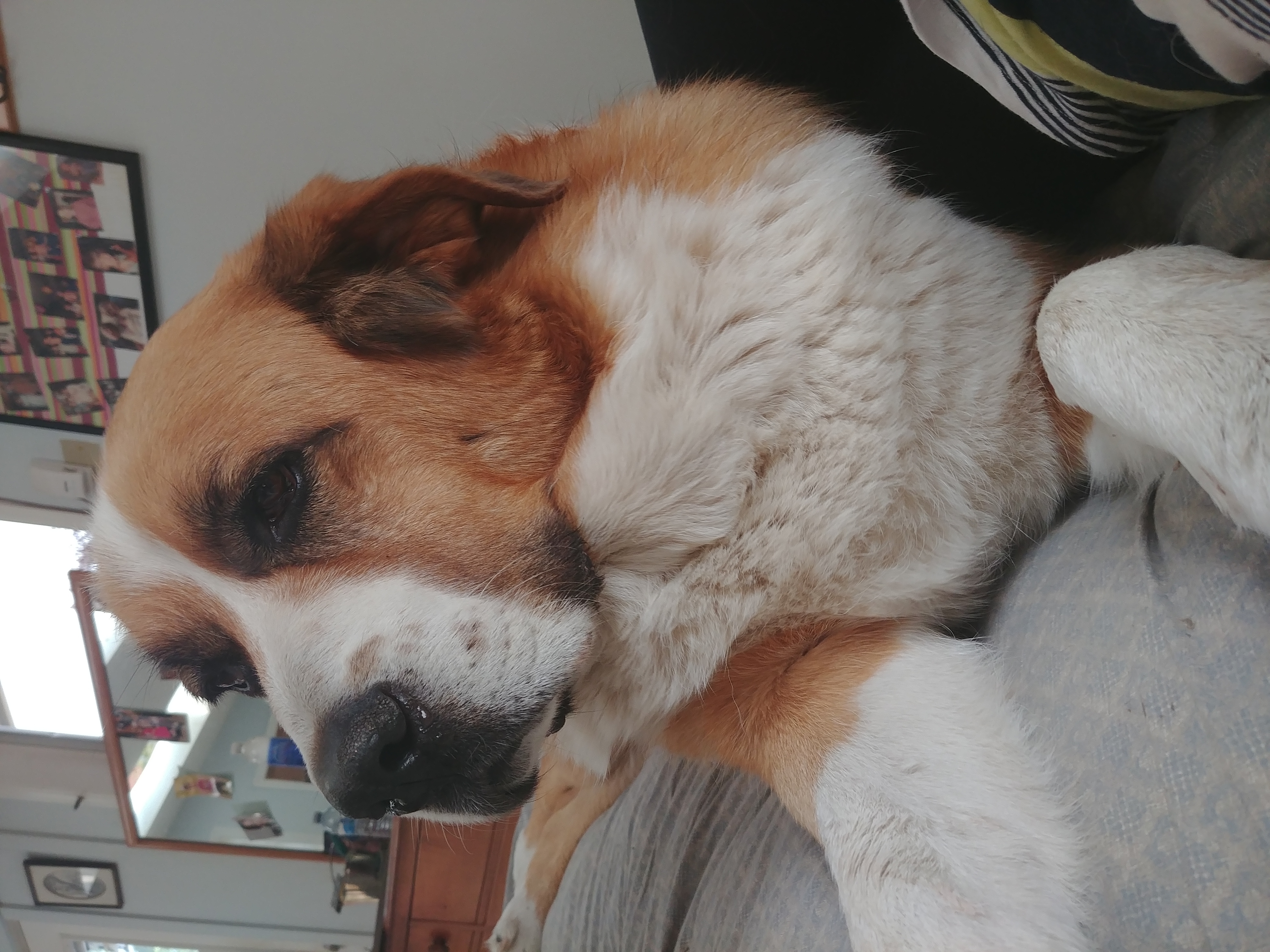 today, our beloved june passed gently from this world to the next.

june came to us in august of 2011, she was 3 years old and was an spca cruelty seizure.
june was never socialized properly, her first home gave her away on craigs list to a notorious hoarder.
the spca staff told me they have taken over 100 animals away from this woman over the years, luckily june was one of them.

mo and i were out at the chilliwack spca one day, i was looking to adopt my own dog, i was still really missing tyra-jane.
i never saw june but mo did. on the way home she asked if i saw that poor terrified dog cowering in the back of her kennel but i hadn't.
the next day i was talking on the phone to the shelter manager about a dog i had seen who i thought would like living at saints. i wasn't sure tho because he was young and healthy and easily adoptable, guilt was telling me i should take someone broken who really didn't have a lot of options.

when i said this to ivanna, she mentioned june to me. june had failed all of her temperament testing. she was virtually feral in her terrible fear. i realized this was the dog that mo had seen and i felt really badly for her so i went out to have a look. i fell in love as soon as i saw her and decided that she needed me and i needed her. while we did manage to barely get a noose over her neck, there was no way we could get her into the van she was flipping out so bad. i asked ivanna if there was another non adoptable dog from the same seizure, and lo and behold there was benny...too old, grossly obese with wrecked knees to walk more than a few very painful steps. what the heck...he can come too.

we got benny into the van and as soon as she saw him, june jumped right in, benny was her friend.

mission accomplished...i was suddenly the proud parent of 370 pounds of new dogs (benny weighed 250 and june another 120) now my couch would be full!

over the next few months benny dropped weight, started some good meds, and could wander around the farm at will. he was a super friendly and cheerful dog. the staff and volunteers swore that benny could hear my car coming from far away and he would start singing about 5 minutes before i pulled into the driveway. he passed away a couple of years ago and is still greatly missed.

june took a while to love and trust me but she got there pretty quick. she was such a sweet, gentle and sensitive girl and life hadn't been particularly kind to her. wrapping my arms around june and feeling her love and trust has always been the very best feeling in my world. june always took a long time to love and trust others. she looked for the long term, the loyal, the committed..it usually took about 6 months of consistent, no pressure, respectful of distance yearning before she said ok to a new human friend. but once you were her friend, you were her friend forever. june was not fickle about that.

over the last half a dozen years, june has made many friends. it is always the high point of both staff and volunteers days here when june lets them love her and become her friend.
last november june was diagnosed with kidney disease. the vets thought she might not make it until christmas, but she managed to keep enjoying life and feeling not too badly until this past week.

i am so sad that she is no longer with us and i know i am not alone in this. june has touched us and made us her trusted family and we are all better for her love.

there are souls in this world who shine with a soft warm light, and june was one of those.
she is gone now, but that light is within us, and safe in our hearts she will forever glow.

love you june. thank you for being such an amazing friend, you were a gift to us all.

Carol I am sorry for your loss :(
Thank you for sharing ur sentiments. Never is it easy to lose your beloved animals but I hope u can take much comfort in the memories and fact that u saved her life and gave her a loving real home.
You all are amazing inside and out!

Sorry for your loss Carol
I didn't know June but saw her briefly on my tour last weekend.
She looked like a very nice dog.
Im hoping to work with more dogs like her and other animals as I start volunteering next week at Saints!!

June was always wary of me, but it decreased a bit each time I came out. It was quite an honour when she stopped barking at me. She was beautiful.

June was such an amazing dog. We all loved her but the relationship between June and Carol was truly something special and rare. We will all miss you June-Bug ❤️

Will miss you June-buggy. RIP and come back for visits. The barn will take some time to get used to you not being there. So sorry Carol.

Our sincere condolences to you Carol - June will be so missed…

Thinking of you Carol....
So glad she had you as her family.
June really was a special dog and we were all blessed to have had her rays upon us.....RIP

so sorry, Carol, it was coming, but still heartbreaking.

So sorry to hear this Carol.

This is so terribly sad, I am so very sorry.

So, so sorry for your loss, Carol. We all know how much you loved June. She was a quiet, gentle presence around Saints and we'll all miss her. Words fail at a time like this. Run free sweet girl.