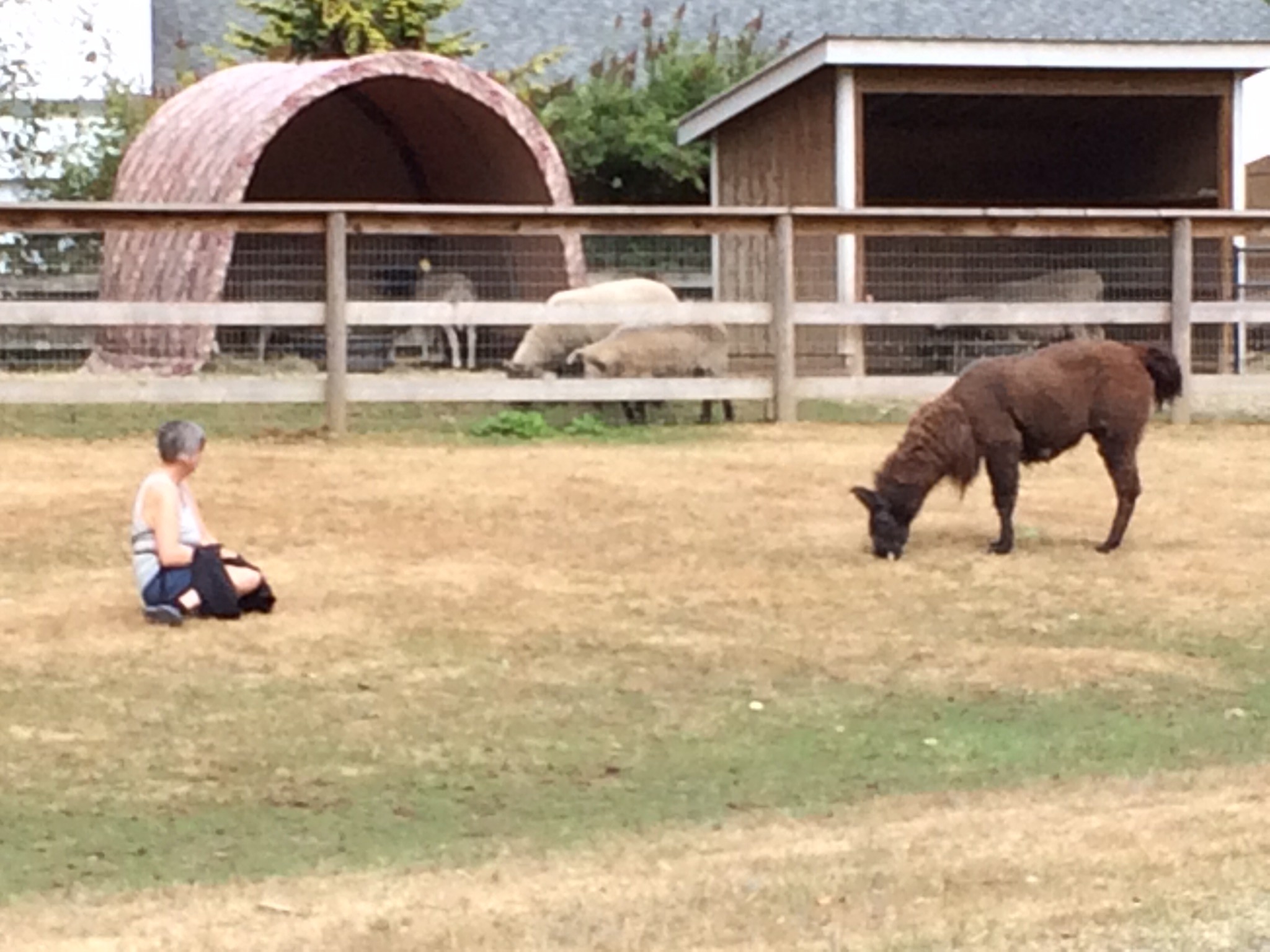 he was an elderly llama with end stage kidney disease but he was so much more than that. he was one of saints original icons, one of the handful of magical creatures at the very beginning of this animal loving dream. Carl, Gideon, Percy, Elli Mae, the first of their respective species whose job it was to implant the magical mystery of farm animals deeply in my brain.
carl had a long history before he even came to saints..accidentally overlooked in a kosher farm cruelty seizure, he survived on his own for almost 3 years living alone in the bush. He was finally discovered by BC Hydro upon their land and they kindly caught him and delivered him to saints.

meeting carl was like meeting an alien, he was such a very deep thinker, a ponderer of possibilities, the recorder and observer of everything that happened at saints. I used to call him the stealth pilot because when i would be out cleaning the barn at night after work, he could walk with absolute silence from window to window and pop his head in to see what i was up to. He wasn't really a sheep guardian, more of a sheep disciplinarian..carl had rules! he thought the sheep were beyond stupid and always getting themselves into trouble. i remember him chasing baby jack all over the field after baby jack dropped a gate on his head. that poor fat little sheep finally ran underneath gideon and stood quivering there so carl couldn't punish him for getting stuck in the gate.

But on the whole carl was a pretty cool dude. he liked to know exactly what was going on and never missed too much of what was happening around here, he was a curious guy. the animal he liked best here was ellie mae. they would lie together and nap on sunny days. carl liked ellie because she was not dumb and she liked carl because he was so soft and comfy to nap upon. Carl knew immediately whenever a new dog showed up at saints. In the fall and winter it would totally perplex him when we would dress the dogs in coats and sweaters and he would have to figure out who they were all over again.

i was so happy when dee dee arrived, i thought finally carl would have someone who spoke the same language and he would have a new best friend. unfortunately dee dee spit at him on the very first day and while he would hang out near her, he never let her get too close again.
carl collapsed again yesterday, the thiamine and B12 injections could no longer control the anemia caused by his ancient kidneys. the vets came out today to help him pass.
the last vision i will hold in my heart of carl happened on this weekend, he snuck up on KO and stood quietly and expectantly waiting for her to hand him his slice of apple.
carl was like that, he had real class.

erin said yesterday that it was hard watching the mighty fall and it has been hard watching carl become frail.
we are all so going to miss him but he has gone to join the others and where ever that is, i know he is mighty again.

rest in peace carl, stealth pilot, one day may we meet again.

The barn was weird this weekend without Brad and Carl :( </3 You guys left some pretty big holes in our hearts!

We had the privilege to visit and my partner got close but carl kept his distance... he will be in our hearts and we feel for your loss. ❤️
It was a great visit and you all do a great job!

I remember the first (and only) time I heard Carl make his warning sounds. I was dumping my rabbit shavings in the bin when he heard or saw something out on the road. I couldn't see anything but if the llama on guard thought there was a problem, well, I went the long way back just in case. He was our stoic sentry.

Carl was the neatest guy. I tried for several years to get him to like me, but he never did. I really liked him though - he was an individual, for sure. Very haughty, a very cool dude. Wow, the barnyard isn't going to be the same with Brad Pitt and Carl gone. Hope you're strolling around somewhere, Carl, freed from your aging body. We'll miss you.

Oh Carl. You were a gem. After all this time you were finally warming up to me. You loved sliced apples and you were so smart. I will miss you greatly. Love you Carl. Rip so sorry Carol