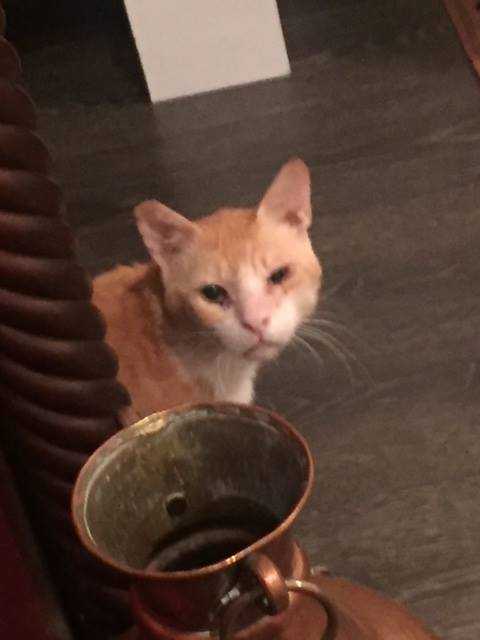 a month ago he was a feral street cat being fed by a group of dedicated colony feeders in Abu Dhabi, United Arab Emirates. These kind ladies had trapped him, neutered, vaccinated, had most of his teeth pulled because of stomatitis, viral tested (FIV+) and released to the streets where they continued to care for him. Three weeks ago a local kind family were over there and they found him almost dead on the street, he had a raging pneumonia. They rushed him to a vet and he stayed there for a couple of weeks getting IV antibiotics and regaining his strength. They did not want to have him put back out on the street, with his FIV and no teeth he was already compromised so they arranged for transport back here and thought they had found him a home. unfortunately this home returned him, but they soon found him another home. this home kept him 24 hours and then asked them to come and pick him up again...he was too shy. the family tried to keep him but their cats did not like him and were beating him up.

so this poor cat who lived on the street almost died but was saved. he then flew thousands of miles hopefully to a better life. but that didn't quite work out as planned. so here is this poor Arabian feral FIV cat with an eye infection with not a lot of options... asking to come in our gate...of course we said yes.

welcome samsam....we will love and care for you and you will soon learn English as we say over and over how utterly adorable you are!!

Omg.....so glad Samson is at Saints...after all the hell he's been thru ...maybe he'll finally find a little piece of heaven...thank you Carol. Welcome Samson!

Wow, what a story! Poor SamSam looks really beat-up but so sweet. He's in a place now (on the other side of the world, how strange life can be) where he'll be safe and loved. He has lots to tell the other cats at Saints, LOL!