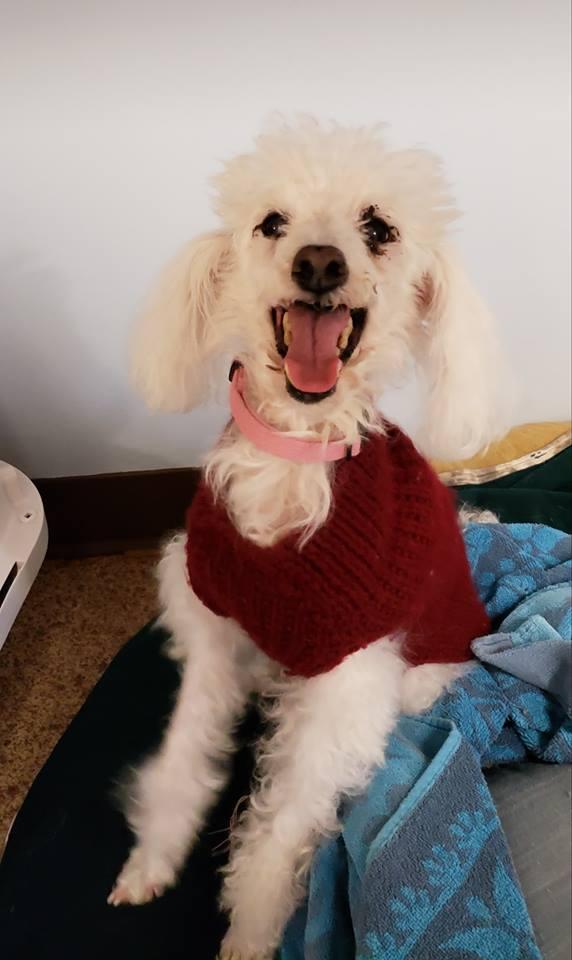 it has taken me almost a full year to partially rehab shyla....with great time and effort we have finally conquered popcorn.
vinny and rocket helped me with this.

shyla used to very cautiously remove the offered single piece of popcorn gently from my fingers by the edge of her very front teeth. it was like she thought it might sting her or something..then she would drop it on the floor and walk away in disgust. she eventually got tired of rocket or vinny rushing in to gobble what she thought was beneath her. to prevent this she started taking the offending popcorn as delicately as she could and then burying it in a blanket but her roomies still found it which pissed her right off. just because she didn't want to eat it didn't mean she wanted them to eat it so we entered a stage of popcorn stale mate.
so for awhile i had to put popcorn rehab on hold because i really didn't want rocket or vinny to be injured.
but today i decided to try once again and lo and behold shyla got it.
first i hand shyla one single piece which she cautiously takes and very slowly eats. then i give rocket his half a dozen pieces and vinny his full handful and viola..they all finish at the very same time, ready for the next go around...safely.
apparently rehab is a bit of a process that needs time and patience and sometimes a few months of a break.
but now hurray! i can eat popcorn again!!

(and brooklyn didn't get any popcorn because she slept thru the whole darn rehabbing thing!)

molly2 is an utterly sweet 14 yr old poodle who lost her home due to incontinence issues.

mcgruff is an elderly pug with health issues who was picked up as stray and never reclaimed..he is ridiculously fun!

and tyler is a super affectionate 17 yr old one eyed, really messed up cat whose owner went into facility care.

all three of them are lovely and we are in love with them all and i doubt any of them are in need of prolonged popcorn rehab.

My favourite kind of blog

Yippee......a blog post with a great story and pictures of all the interesting characters.....bring on the popcorn!!!

I need to come into the house more. I feel I am missing out on meeting some really cool dogs.

I'm in love with the 2 newbies.❤
McGruff should be called McSweet.....such a doll. We went for a very short walk today (end of driveway)...he got tired out pretty fast, and crashed ino a sound sleep once back in the kitchen.
and Molly2...💗also went for a walk with 2 of her kitchen mates, and enjoyed it. She is a such a cuddle bun....loves to be held, and carried in your arms in the house..(and she's a lightweight, so easy to hold.)

I enjoyed your popcorn story Carol..
My 3 all know the sound of it popping in the microwave, and sit in the kitchen, whining and crying, excitedly waiting for it to finish so they can all have their handful. It's always a hit ( no butter or salt of course!)
Thanks for the pics and update....keep um coming...

Yay!! Update posts with pictures. I’ve missed them so 😀😀