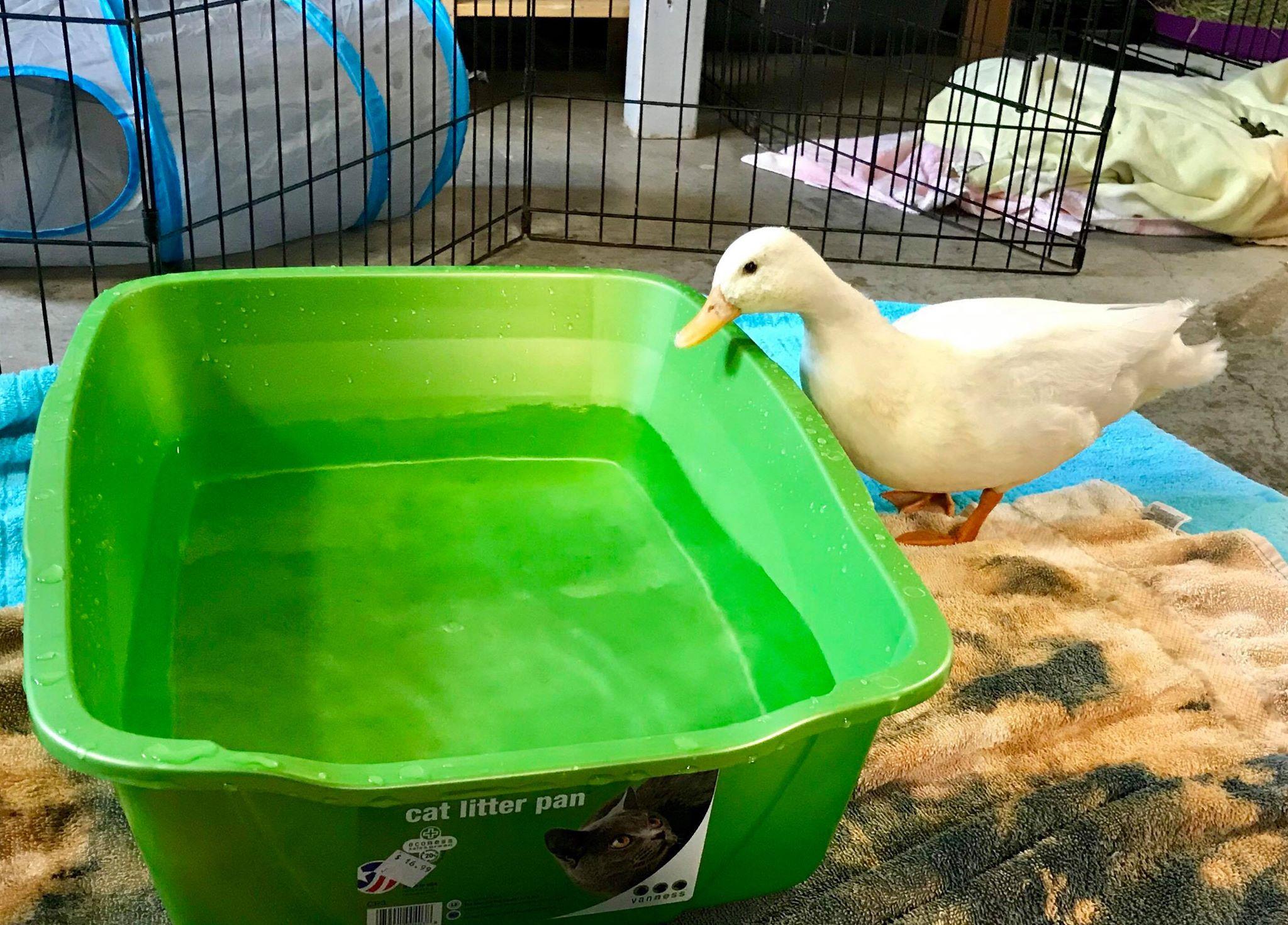 Rescue really isn't all that simple. Some days it will boggle the brain. Even things that ought to be easy..aren't really all that easy.
Take for example caring for ducks, in fact just one particular duck named Tiny Tim.
Tim has been here for what...3 or 4 years?
It's been easy..give him a nice clean, dry, and warm home, a safe outside yard, a special friend,(Edwina,) feed him well including snacks and treats and most importantly a clean pool of water to swim and bathe in and Tiny Tim was happy!
Until last week.
I don't know if you know this but male ducks are sex fiends...it is top of their big Three list...sex, eating and swimming...in that order and amazingly they can do all three things consecutively without a second thought!
So last week Tim participated in his most favorite activity one time too many and his penis prolapsed.
I would have felt sorry for him but he kind of deserved it. Too much of anything is not a good thing.
But being dutiful duck caregivers we took him to the vets and he had surgery to poke it back in with sutures to hold it.
Even tho we set him up in a recovery pen in the shop, it came back out so we took him back in and repeated said procedure.
And out again it popped. Arghhh!
Unfortunately we were left with no choice, either euthanize ( it was starting to go necrotic from being stuck out) or amputate his tiny little penis of which he really was very fond.
Now I also don't know if you know that duck's penis's are strictly for reproduction, they don't have urethra's so passing urine was not going to be a problem.
The answer seemed simple, amputate the problem and then Tiny Tim could get on with his life penis free.
Except...just because his tiny overly friendly appendage is gone, doesn't mean that Tim is not going to miss it. He is still going to want to be a sex demon, he just no longer has the right tool.
I feel badly for him, he is going to really want to do something that he is no longer capable of doing and there is no way to explain this to him.
I am not feeling badly for Edwina tho..she is not really all that into sex. When she lived with Floyd she used to fake headaches for weeks and hang out in her nest so he would leave alone.
I am pretty sure that Edwina will have a party once she realizes that Tim has lost his favorite toy.
However, she is actually lonely because Tim lived with her and during his recovery she is now all alone. Edwina is not happy about this.
AND...Tim can't go anywhere near her for at least 6 more weeks so he has time to develop scar tissue because being near Edwina will get him aroused. This is apparently a no-no when recovering from a penile amputation.
So many new things that we really don't want to learn.
Anyway, we are reconstructing Edwina's pen so we can temporarily move Floyd next to her to keep her company so she is no longer lonely. Floyd can't go in with her because many years ago he actually accidently broke Edwina's leg because he too is a sex fiend and he wouldn't stay off of her (Floyd is a very large duck.)
Are you seeing how complicated these damn ducks can be?
Tiny Tim had his 5 day post op check today, all is well, but he has to stay on the oral antibiotics for another 9 days, have you ever tried to pill pop a duck? He gets his sutures out in another five days but the really good news is that finally Tim was cleared for a bath!
I don't know if you know that ducks hate to be dirty, personal hygiene is really important to them (probably because they have sex so much!) A dirty duck is not a happy duck so 2 weeks of no bathing was a real trial for Tim.
Today, Tim finally got a bath and that made him really happy..baths will now have to be his most favorite thing and I am conflicted..sad for him, happy for Edwina.
I don't know if you knew this before now but ethical duck care is emotionally draining.

What a great story. We need for your organization to call tomorrow Friday as We raised money to donate for you with regards to my mom passing and she would have wanted that. Please call my sister JANICE 250-702-7558. ASAP Faith as we want to give you personally the funds. We are in Whiterock area til Sat am. THANKYOU. Judy Jansen

The ladies, they just don't understand.

I must say that I am really enjoying the posts lately. They are informative with a lot of humour as well.

she faked headaches for weeks and she'll have a party,
I laughed so hard the dogs woke up. I thought roosters
were bad. ha ha ha. good post

I LOL’d way too many times reading this. 😂