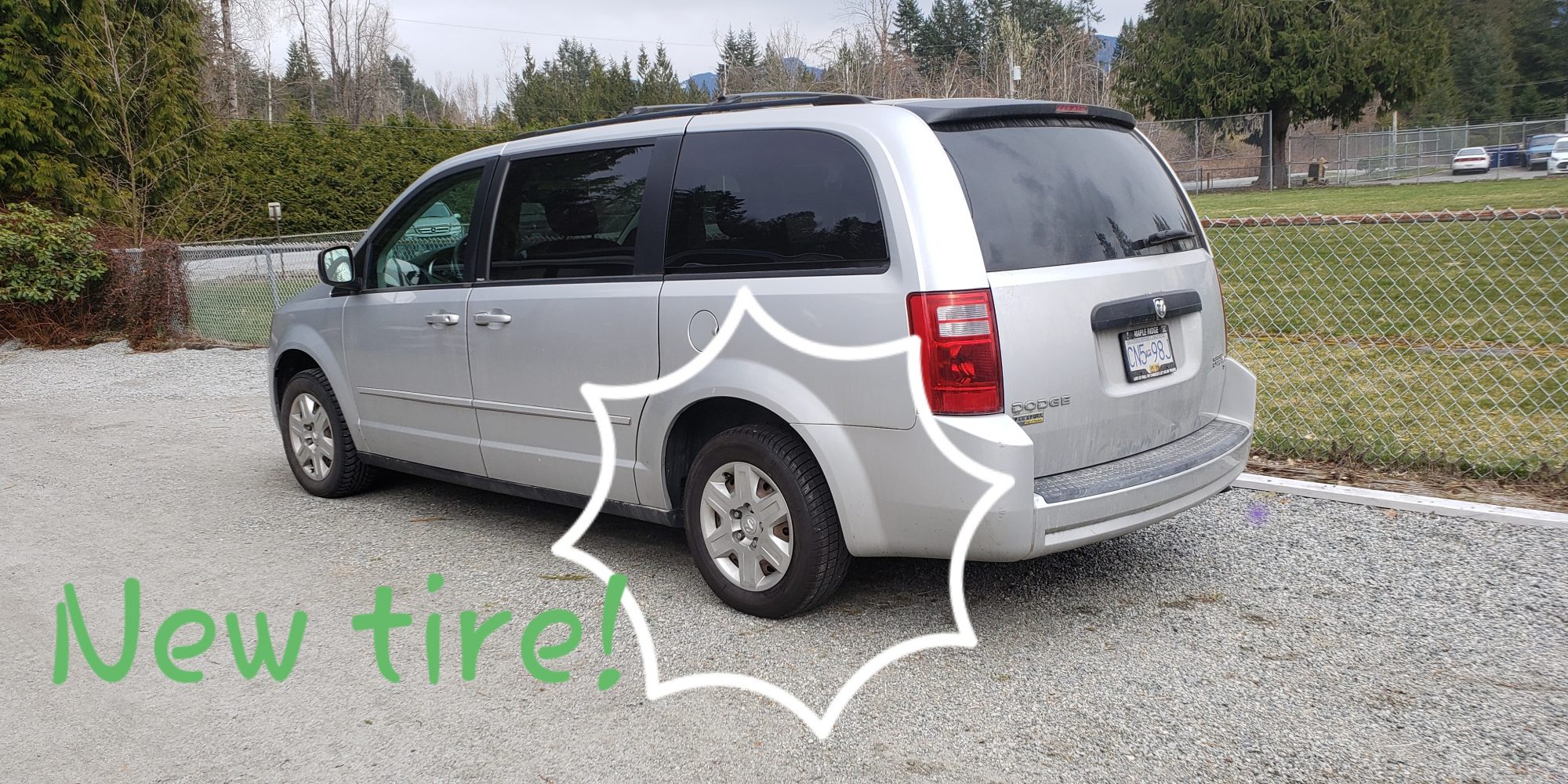 Fraidy went to the vet this afternoon. I had just left the stopsign nearest the clinic afterwards when the tire pressure light on the dash came on (fuck) AND it beeped at me (shitfuck). Then in an instant the telltale thwack thwack thwack of a flat fuckin tire. By then I was already rolling through the next intersection. Sonofa! No choice. I limped the van through the light on Lougheed and pulled into the chevron as careful as I could. Got out, looked. Oh yay. Flatter than a pancake. Like riding on the rim flat. Cocksucker. Looked under the van. No spare (like it mattered, no jack or tire iron either so fat lotta good a tire would have been). Guess what else I didn't have? That's right. No money. No credit card. Nothing. The only thing in the van is a partly used Esso gas card. Called Carol. No answer. Called Renee. No answer. Dammit. Carol is really sick and was probably trying to sleep (but did call me back) and Renee would have been right in the middle of feeding dinner. Messaged my coworkers and Roane came down, brought me the debit card and took Fraidy back up to SAINTS so she would be safe. Thank you Roane! Woulda been a helluva long walk for us otherwise. Across the highway is Fountain Tire. Now, I don't know if any of you have ever dealt with this store in Mission but they are AWESOME. This is where I take my own car. I called Fountain and explained my situation to the owner Bill who happened to answer the phone. He says, got BCAA? Nope. Got a spare? Nope. Ok no problem he says. Says, I'll send my guy over to you asap with a portable unit and we'll see if we can get it to take air. Ten minutes later here comes this guy, his name is Bailey, walking down the highway carrying this metal tank thing with a hose and some other shit. Seriously. He walked down the street to the intersection, crossed the highway, carrying this stuff, for me. Bailey pumps the tire, and as fast as the air goes in, it's rushing out the hole in the side, through this gash that I SWEAR I don't remember doing. He says, can't patch it, needs a replacement. Ok I say, now how am I going to get the van to the store? Yeah, it's just across the highway but there's a meridian and you gotta go all the way around a couple blocks to get to that side of the road. Bailey and I look at each other. He says get it running. He says he'll take off the hose at the last second. Ok. I'm gonna drive like a mother fucker to get there before I run out of air? Yep he says. Drive like a mother fucker, I'll meet you back at the shop. I did and he did, then he fixed the tire properly.

Bailey and Bill saved us the tow bill, they didn't charge for coming to the rescue. Didn't charge for Bailey's time. I paid for the new tire and was back at work within an hour of my vet appointment. So if you are looking for some tires or mechanical work I highly recommend Fountain Tire. Bill. Bailey. Thank you. Saved this mother fuckers ass today. It's the little things ☺️

I need some new tires, I will go there. Sound like good
people. Thank goodness you didn't have a crazy dog with
you.

I also deal with Fountain Tire in Mission. Bill is the best. Great service, friendly people. Wouldn't go anywhere else

Oh Erin you r too funny you could have called me I would hawe come remember your friend? Glad it all got fixed I will have to remember fountain tire thanks