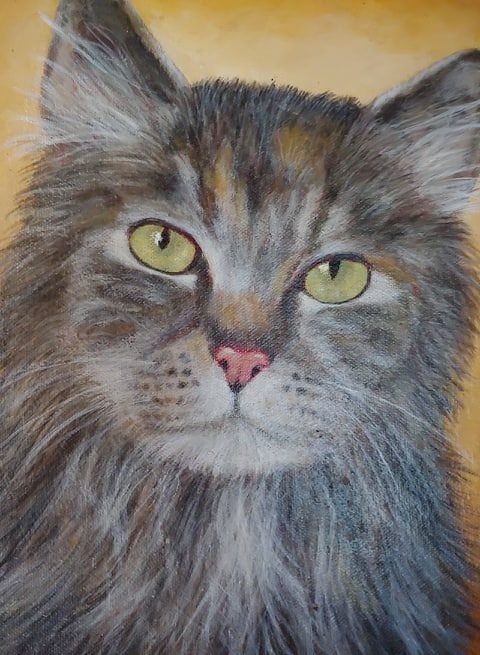 There are so many stories here, past and present and many more to come in the future. But one story changed the world for a thousand animals and that was the story of Wee Hopeful Bug.
I can't even share an actual photo of her with you, my computer has crashed so many times and so many absolutely precious photos have been lost so you will have to use your imaginations to see the true face of this sweet tiny cat who meant so much.

Many years ago a litter of kittens were rescued, unfortunately the babes came down with distemper. Only two survived, Hope and Romeo but they did not escape unscathed. Both were afflicted with chronic and severe Irritable Bowel Syndrome. Every possible avenue of treatment was explored and tried but the kittens remained incontinent and leaked feces all over the place. The original rescuer was unable to manage this and so she turned them over to another rescue which at that time, i happened to run. When they arrived they were both about half grown, romeo who was less affected was of normal size but Hope whose bowels were totally destroyed was the size of a 2 month old and hence the name change to Wee Hopeful Bug. In the end this rescue also could not manage them, one day the volunteers said to me that the disgusting mess these two made was not fair to the volunteers or the other cats. They were right of course but once Hopey and Romeo had been "saved" as tiny babies, what was to be done with them now? No one was going to want them, no one was willing to take them on so what were we supposed to do?

You really can't go knocking off half grown survivors who were happy, affectionate, playful and interactive just because they made a terrible mess so I bit the bullet and took them home. And yes they were terribly difficult to live with but they were cheerful and happy and I fell in love but.... my family did not and who could blame them?
I watched them mature, Romeo became a regular sized cat, Hopey grew very little. At full growth she was the size of a three month old kitten which made me love and want to protect her even more. I watched her chase leaves across the patio, and twist ties across the kitchen floor. She tolerated me bathing and combing feces several times a day from her sparse and unhealthy coat. I would wrap her butt end in towels so she could cuddle up on my chest...I loved that little broken cat with a fierce mothering passion.

Wee Hopeful Bug died within a couple of years after SAINTS birth. She died in her sleep, I never saw it coming, I never had a chance to say good bye or give her that last final kiss. She is the only SAINTS animal buried here, underneath an ancient tree in the bottom field. She is and always will be the spirit of SAINTS that moves us and guides us. She was a gift to me and to all of the animals who have come here since.
This is the only picture I have left of her, a painting I commissioned after she passed away.
here you can see Wee Hopeful Bug, the very first Saint.
She was tiny.
She was mighty...
and she changed the world for 1000 broken animals and made it a better place.

I hope you are able to find a chime that speaks to you of Hopey Carol. In my ridiculously nostalgic mind I think it would be nice if everyone who enters SAINTS passes under a memorial in honor of the tiny little cat who, through you, gave so much to so many.

that windchime which was a beautiful pottery peice shattered in a storm last year suzanne..i have struggled with if i should replace it but honestly i have yet to find one that speaks to me. maybe one day i will find one that has hopey written all over it.

Oh Carol, years ago when I first found SAINTS I went back and read every single post you had written about Wee Hopeful Bug and her stunningly beautiful brother Romeo and every one of them brought tears to my eyes. I remember in one of them you talked about her lying on your chest at night and how you could barely feel the tips of her tiny claws as she put her paws on your cheeks.
You used to have a wonderful section on your website that had the pictures and back stories of all the former SAINTS and I loved reading all about them. But that was before 1000 SAINTS and now it would take two full time employees to manage just that.
Is the wind chime over the gate Wee Hopeful Bugs?

Oh...love this post Carol..I knew Wee Hopeful Bug was the 1st Saint, but didn't know her full story...
and such a beautiful painting of her..very special.
Thank you....❤
"Hopeful Bug....is that where your "hope floats" pholosophy comes from?